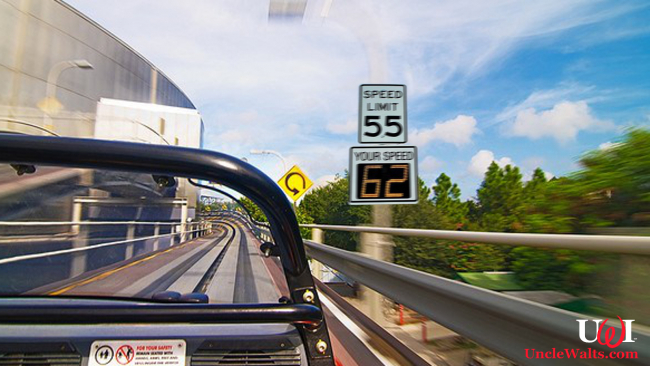 WALT DISNEY WORLD, FL — The Orange County (Florida) Sheriff’s Department is putting out the word: a traffic violation is a traffic violation, even in a Disney park. Break the law, and you will be ticketed, often before you even reach the gift shop.

“It’s true, we’ve been cracking down,” says Sheriff’s Department spokesperson Jun Sheriff (no relation). “Test Track in Epcot has always been a haven for speeders and reckless drivers. And although we’d issue a citation occasionally for extreme cases, usually we’d let them slide. Well, no more.”

Not just a stroll(er) in the park

Sheriff (no relation) says that after speeding tickets, stroller violations are the next most common.

“We see folks pushing strollers who cut people off, run over pedestrians, fail to signal turns, you name it! Seriously, some of these people should not be permitted to drive a stroller.

“And most of the time, if they’re involved in a collision, they’ll leave the scene without exchanging insurance information as required by law. Pathetic.”

“It’s a money grab by the county, pure and simple,” Korrow tells Uncle Walt’s Insider. “The deputies know they can issue six citations for each Test Track vehicle — and none of the riders are actually driving the car!”

Sheriff (no relation) disagrees. “Florida law is clear that no mental state is required for a speeding violation — you don’t have to intend to speed to be in violation.”

So how can Test Track riders keep from getting a ticket, we asked?

“Simple,” says Sheriff (no relation). “Try to get in a car with at least one really big fat guy. The extra weight and added wind resistance will slow the car down.”

Wonder what the high score is on that sign? Let us know what you think below!

April 9, 2019 by Marty in Florida
© 2020 Uncle Walt's Insider. All rights reserved. All images used with permission. Unless otherwise attributed, all images licensed under Creative Commons CC0 license. This site is protected by reCAPTCHA and the Google Privacy Policy and Terms of Service apply.