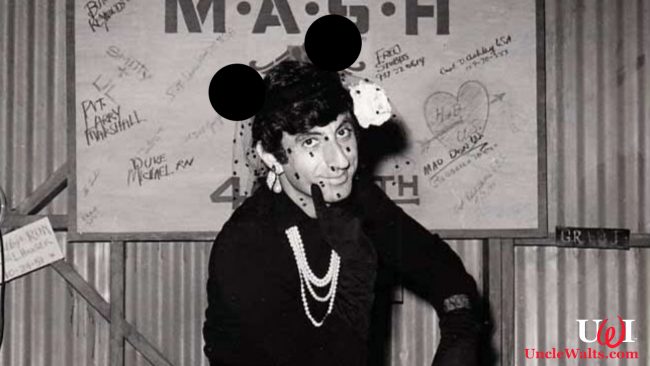 One of the most beloved Disney princesses is finally getting his own attraction! Wait, “his”?

BURBANK, CA — It’s no secret that Disney has a big secret. And they are going to secretly announce their secret at the super-secret D23 Expo (that you probably haven’t heard of unless of course you’re a loyal reader of Uncle Walt’s Insider). But we know the secret!

The big announcement for this year’s super-private event is: one of the most beloved Disney princesses is finally getting his own attraction! Yes, Disney is fully welcoming their newly-acquired Fox properties (as in TV shows, movies, etc., not just real estate) into the Disney family by giving one of the most beloved Fox characters his own ride.

Klinger finally gets his Section 8

Maxwell Q. Klinger, better known as Corporal Klinger from the hit television series M*A*S*H, would often dress up in woman’s clothing, engage in crazy stunts, and eat cream cheese filled pretzels, all in an attempt to be discharged from the military as someone who is mentally unfit for service. M*A*S*H viewers may recall this type of discharge being known as a “Section 8.”

As soon as the ink dried on the Fox acquisition by Disney, fans from all over the world started to petition Disney to recognize Klinger as an official Disney princess. Uncle Walt’s Insider broke the news that this petition was a rousing success. And now the company will announce the newest Disney Princess-themed attraction will be built at both the Walt Disney World Resort, Spa & Concentrated Orange Juice Factory, and Disneyland Resort, Spa & Burned Woodland Creature Rehabilitation Center.

All signs point to the new attraction, called “Corporal Klinger’s Section 8,” being a thrilling new dark ride/roller coaster combination. In that sense it will be like the Seven Dwarfs Mine Train, which of course is also set during the Korean War.

Construction is set to begin on both coasts this fall, with projected opening in 2021. As always, Uncle Walt’s Insider is here to help you make your vacation to any theme park in the world a success, and our panel of experts is here to help!

Wasn’t Klinger promoted to Sergeant? Let us know in the comments below!

August 20, 2019 by Walt in California, Florida
© 2020 Uncle Walt's Insider. All rights reserved. All images used with permission. Unless otherwise attributed, all images licensed under Creative Commons CC0 license. This site is protected by reCAPTCHA and the Google Privacy Policy and Terms of Service apply.