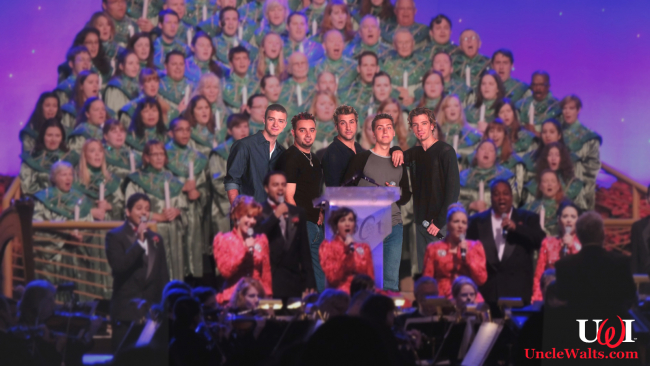 Disney is getting more adventurous with the concept of “narration.”

WALT DISNEY WORLD, FL — Walt Disney World and Disneyland have been telling the true story of Christmas in spoken word and song since the First Council of Nicaea in 325 A.D. [Ed.: Hey, check this before publishing. I thought it didn’t start until after the Reformation.] The Candlelight Processional features a full orchestra, a massive choir of Cast Members and random locals who own gold robes, the Voices of Liberty, jugglers, fire-breathers, acrobats, and a celebrity narrator.

The narration is typically spoken in English, but there have been exceptions. For example, actress Marlee Matlin, who is deaf, has been narrating the story in American Sign Language for years. (An interpreter then translates the story into speech.) Regular celebrity narrator and country superstar Trace Adkins likes to show off his fluency in Mandarin Chinese. (An interpreter then translates the story into American Sign Language.) And just last year the entire story was told by Baby Groot, using just three words repeatedly.

Disney fans await the announcement each year of who the celebrity narrators will be, and the list is often in flux up until the date of performance. Last week Disney announced that Edward James Olmos, who had been scheduled to perform on December 24 & 25, had been recalled to the Galactica or something. Replacing Olmos will be actor Joey Fatone, best known for his role as Angelo in My Big Fat Greek Wedding 2.

Apparently Fatone also sings, and was once part of a group called N*Sync. [Ed.: An asterisk? Really? Are we sure it isn’t supposed to be N*S*y*n*c, like M*A*S*H?] Well, Uncle Walt’s Insider has learned that Fatone has invited his group to join him at E*P*C*O*T to sing the narration, boy-band style. We anticipate a lot of “ooo, baby” and “yo, girl” lyrics to be worked into the script.

Also, because the narration will be musical, the carols and hymns traditionally sung will be spoken by the choirs and orchestra instead. Could be interesting!

It turns out some people have heard of this S*ync group before and are big fans. Annoyingly, our own Ub is one of them. When he showed up at the office at his usual time (late), he read the story over this reporter’s shoulder and then couldn’t stop squee-ing for an hour. In fact, Ub was the one who insisted we add the “Squee” with three exclamation points to the headline. Guess we know where he’ll be on Christmas Eve!

Will you be there, too? Can you report back if Ub squees too much? Comment below!

December 17, 2018 by Marty in Florida
© 2020 Uncle Walt's Insider. All rights reserved. All images used with permission. Unless otherwise attributed, all images licensed under Creative Commons CC0 license. This site is protected by reCAPTCHA and the Google Privacy Policy and Terms of Service apply.