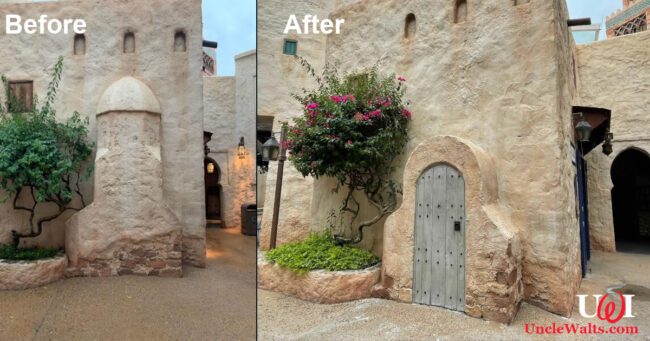 Will other Pavilions do the same? We’re looking at you, France.

Disney officials announced today that the Morocco Pavilion at the EPCOT Theme Park, Resort, Spa & Institute for Gender Studies has undergone gender reassignment surgery. The land in the World Showcase portion of the park will now identify as the “Moroccette” Pavilion.

After the pavilion’s, er, gender-specific area was surgically altered, as seen in the photos above, the number of guests wanting to take photos there has dropped dramatically. Still, Cast Members from Guest Relations are on hand to ensure guests use the proper name, and pronouns, while visiting the pavilion.

This recent change has guests wondering if the ever popular Epcot International Festival of Fertility will return. Calls to The Moroccan were not returned.

Will you visit the new Moroccette Pavilion? Let us know in the comments below!

April 23, 2021 by Walt in Florida
© 2020 Uncle Walt's Insider. All rights reserved. All images used with permission. Unless otherwise attributed, all images licensed under Creative Commons CC0 license. This site is protected by reCAPTCHA and the Google Privacy Policy and Terms of Service apply.