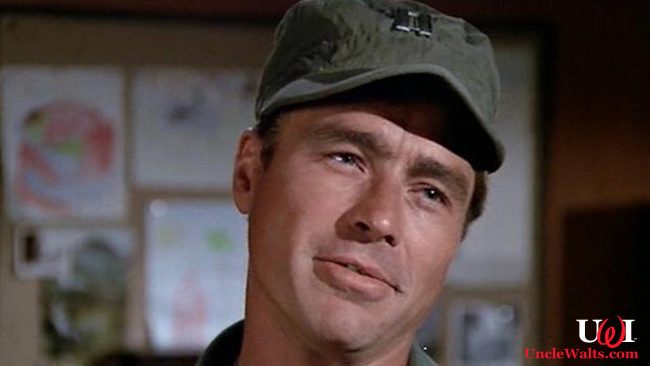 MAGIC KINGDOM, FL — Disney fans watching the parade at the opening night of the 2019 Mickey’s Not So Scary Halloween Party were shocked to see a new “villain”: Colonel Samuel Flagg.

Flagg, a recurring character on the long-running sitcom M*A*S*H, was an army intelligence officer. A nemesis of Dr. Hawkeye Pierce and psychologist Sidney Freedman, Flagg’s antics illustrated why, at least for him, “army intelligence” was an oxymoron.

Many guests told Uncle Walt’s Insider that they do not find Colonel Sam Flagg to be a villain, but more of a Sam Eagle-type character: very gung-ho and patriotic to the point of ridiculousness. But they conceded that in one later episode the writers did take Colonel Sam Flagg to a pretty evil extreme.

Possibly the biggest surprise is how fast Disney is moving on adding newly acquired characters to the parks. Disney (the company) spokesperson Jun Disney (no relation) spoke with Uncle Walt’s Insider about the new characters.

“It’s no secret that Imagineering has no original ideas and they just turn to the movies and TV shows for, let’s just call it inspiration. It’s a total joke, like Joe Rohde is such a genius, yet where is the originality, Joe? Where?

“I’ll tell you a secret, we only acquired Fox to get more movies and TV shows that we can use for attractions inside the parks. Just wait until the license expires for some Marvel properties. And as for The Simpsons… let me just say, we have plans!”

Are you a communist sympathizer? Let us know in the comments below!

August 29, 2019 by Walt in Florida
© 2020 Uncle Walt's Insider. All rights reserved. All images used with permission. Unless otherwise attributed, all images licensed under Creative Commons CC0 license. This site is protected by reCAPTCHA and the Google Privacy Policy and Terms of Service apply.