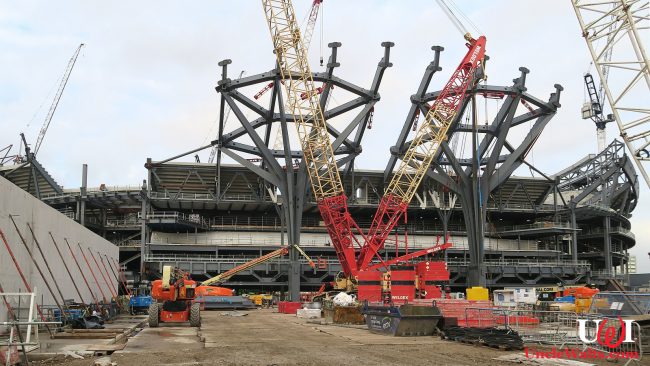 It just looks like a stadium being built. Have we ever steered you wrong?

E.P.C.O.T. CENTRE, FL — The Uncle Walt’s Insider offices in Svalbard are all buzzing over this exclusive, breaking news that you will ONLY see here! [Ed.: There’s probably a good reason for that.]

While details on the upcoming Mary Poppins attraction are still kept super-secret-squirrel within the walls of Walt Disney Imagineering, your crack-headed [Ed.: That’s the right term, yeah?] team of reporters at Uncle Walt’s Insider has obtained this EXCLUSIVE photograph taken within the walls of the attraction.

As you can see, it clearly shows an all new ride system that turns into stadium style seating. This photographs is clearly from the final scene where Mary Poppins is struck down by Mr. Banks, only to rise again and float off in glorious fashion. The multiple tree arms indicate to us that guests will float away with Mary Poppins, assuming they can maintain a hold on their umbrellas. (Rumors are that testing of this feature has not gone well.)

Stay tuned for more news as our internal sources continue to share with us more about this exciting new attraction!

Are you Team Banks or Team Poppins? Let us know in the comments below!

Cover photo: Of course it’s from the Mary Poppins ride — it says so in the image name! Photo by Hzh [CC BY-SA 4.0] via Wikimedia.

November 26, 2019 by Walt in Florida
© 2020 Uncle Walt's Insider. All rights reserved. All images used with permission. Unless otherwise attributed, all images licensed under Creative Commons CC0 license. This site is protected by reCAPTCHA and the Google Privacy Policy and Terms of Service apply.