Man, unable to merge, finally exits after 8 hours of circling the Hub 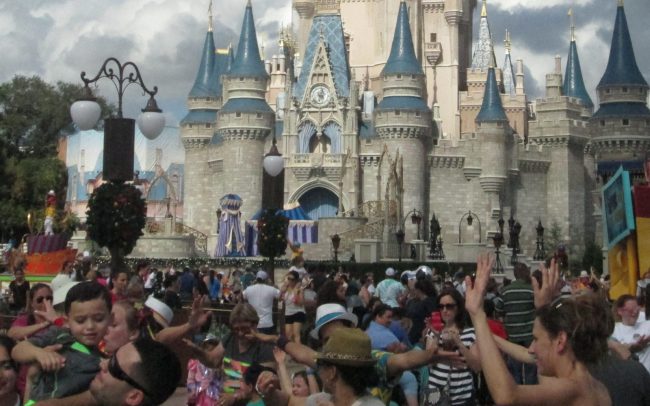 Thanksgiving week brought record-setting crowds to the Magic Kingdom Park at Walt Disney World Resort near Orlando, Florida. Despite the crowds, guests and their families in attendance still had a great time — with one notable exception, a man who was not able to exit from the Hub in front of Cinderella Castle.

With an improving economy, more people than ever are visiting Walt Disney World for the holiday season. While this has a positive effect on Disney’s financial numbers, it does have a downside: long lines and crowded walkways. Uncle Walt’s Insider roamed Main Street to find out how guests were navigating through this massive crowd. We met one very tired-looking man, Ted Underhill, 46, of Newport Beach, CA.

A Man on a Mission

Mr. Underhill wanted what many guests want, a fantastic vacation filled with fun, excitement, churros, and short wait times. Despite living less than 20 miles away from California’s Disneyland, Mr. Underhill explained that the three-hour drive to that park is just too much for regular visits. In fact, until this trip to Florida, he hadn’t visited any Disney park since 2009.

Uncle Walt’s Insider sat down with Mr. Underhill at Casey’s Corner, and over a cold drink and very late dinner, he told us his story. “As soon as we passed under the train, I told my wife that I would head over to the mine train roller coaster ride to get a Fastpass, while she headed to the line for Space Mountain with the kids. I couldn’t find the Fastpass machine, and a friendly employee told me that it was all done on the Magic Band these days. I had no idea! As I walked through the park to spaceland, I was busy on my phone signing into the Fastpass app on my iPhone X.”

That is where his trouble just started. Mr. Underhill continued, “I merged into traffic circling around that statue of Walt Disney, you know, right there in front of Elsa’s castle. As soon as I did, a show started. The crowds pressed in, and I couldn’t get through. I figured I would keep circling, as the show couldn’t be that long! Well, after it ended, people just hung out and started taking pictures in front of the statue and castle. At one point I even ran into one of those fixed selfie sticks!”

Between long sips through a Mickey-shaped straw and bites of a hot dog, Mr. Underhill continued to tell his story. “I stopped for a moment and looked up at Walt as he mockingly pointed to what I hoped was a way out, and I realized that it had been 3-1/2 hours since I got into the mess! I looked down at my phone to see a text from my wife asking where I was and if I wanted a frozen banana or Mickey bar, and right then my phone died.”

Mr. Underhill continued to circle, with every opportunity to exit blocked. Only after another show, an afternoon parade, a marching band, an evening parade, and finally the evening fireworks show concluded did he see light at the end of the tunnel. Unfortunately that light turned out to be the critically acclaimed projection show, Once Upon a Time.

A Hero to the Rescue

Some unknown amount of time later, a very tired Ted Underhill was circling on autopilot, when he heard a voice, looked up, and saw he was all alone — except for a lone cast member, Avery Mitchell, a student working at the Magic Kingdom on the College Program. Mr. Underhill explains, “I was defeated and thought I would never get out. Then I hear this voice, look up, and like an angel dressed in white carrying a broom and dust pan, was Avery. She told me that the park was closed and I needed to make my way to the exit. I looked around, and we were all alone, minus one security officer who was watching from a distance. As I walked down the street to the exit, cast members lined the street waving goodbye to me. Out of nowhere Mickey and Minnie came to either side of me, and we walked arm in arm to the exit. After passing through the gate, a cast member handed me a button that said “Last Guest” and had the date written on it with a sharpie. As I walked to the bus stop, I heard a call-out on a radio, ‘Kingdom clear.'”

Despite the blisters and massive sunburn, Mr. Underhill had one more thing to add, “I always wanted to be the last guest out of the park. Man, they really treated me like royalty!”

Have you been stuck at Walt Disney World? Let us know in the comments below!

December 11, 2017 by Walt in Florida
© 2020 Uncle Walt's Insider. All rights reserved. All images used with permission. Unless otherwise attributed, all images licensed under Creative Commons CC0 license. This site is protected by reCAPTCHA and the Google Privacy Policy and Terms of Service apply.