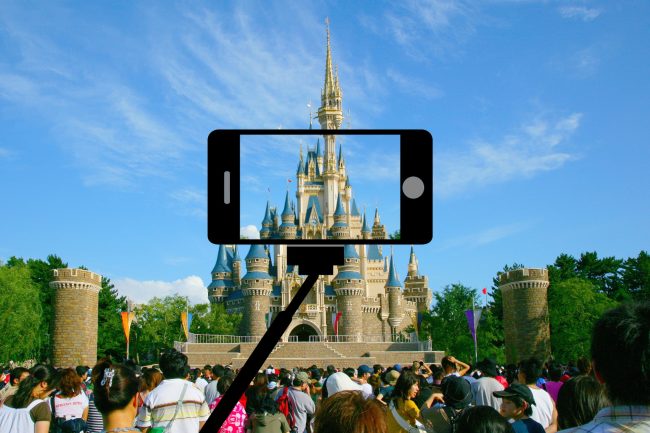 More and more people are leaving their digital cameras at home and relying on their cell phones to capture those magical memories. And why not? The camera in the latest smart phone is probably better than your aging digital camera. From weddings, child birth, and pictures with Mickey, iPhone-shaped video and photographs have become part of our daily lives. And now, the latest announcement from Disney Parks and Resorts shows that they understand this trend, as they plan to remove many PhotoPass photographers from the parks and substitute fixed selfie sticks in key locations.

The first ever selfie was taken in 1839 by a man named Robert Cornelius. Yes, you read that right: an average person, not even a reality star, was responsible for the first selfie. While selfies have been around for almost two centuries, it wasn’t until the smart phone came about that the term was even first used. Millions of smart phone users have discovered they do not have to be left out of the picture, nor do they have to even turn the phone around to take the photo! Phone manufacturers have made shooting selfie photography easier than ever, and now Disney has found a way to hop aboard this growing trend.

Disney has announced that beginning this Christmas season, families visiting the Walt Disney World Resort will find a few less cast members equipped with camera gear roaming the parks, but a few more selfie sticks. According to the announcement, guests will now find “selfie stations” in key locations where PhotoPass photographers used to camp out — most notably on Main Street and in front of the Partners Statue in the Magic Kingdom Park. The sticks are fixed in place, so that the dangers of guests carrying them is avoided.

Disney banned guests from bringing selfie sticks into the parks in 2015, so this announcement comes as somewhat of a surprise. We reached out to Disney spokesperson George Cookson for a comment on this shocking news. “To be frank, guests who visit Disney often leave their brain at the gate,” Mr. Cookson said. “The ban on selfie sticks was needed after a guest nearly took off Jack Sparrow’s head while trying to get a picture with him! Thankfully, the cast member portraying Jack Sparrow suffered only minor injuries. We’re still investigating how the guest managed to get on board the Sailing Ship Columbia in the first place! And of course, now that it’s public that Cinderella Castle is inflated, there was always the risk that someone would puncture it. ”

The growing popularity of selfies and the danger of guests wielding selfie sticks, perhaps combined with a decline in PhotoPass sales, have forced Disney to make these drastic changes in a family-friendly way. Mr. Cookson explained the thoughts behind this, saying, “Today’s society is full of mistrust. Why, with the growing cost of cell phones, you can barely afford to take a Disney vacation! Now, though, instead of handing your phone over to a stranger, you can take advantage of our new Disney Photo App and fixed selfie stick locations. No longer will you need to worry about sweaty hands dropping your phone — you just insert it into the holder and snap away!”

Under the current PhotoPass system, most photographs cost $14.95 to download individually, but guests can purchase a “Memory Maker” package with unlimited downloads of all pictures. The Memory Maker package costs a whopping $199.99, but is available for $169.99 if purchased at least three days in advance of your vacation.

With the new selfie-based system, the photo app from Disney will be free, and will be required to use the selfie sticks. Embedded Bluetooth technology will prevent just anyone from using the new selfie sticks. To download the photographs, it will cost $99.99 if you purchase the “Self-Memory Maker” package before your trip, with the cost going up to $149.99 afterwards. As with the current Memory Maker, the package includes the rights to use in both digital and print formats. The app will offer Magic Shots at no additional charge.

Love them or hate them, selfies are here to stay!

November 13, 2017 by Walt in California, Florida
© 2020 Uncle Walt's Insider. All rights reserved. All images used with permission. Unless otherwise attributed, all images licensed under Creative Commons CC0 license. This site is protected by reCAPTCHA and the Google Privacy Policy and Terms of Service apply.