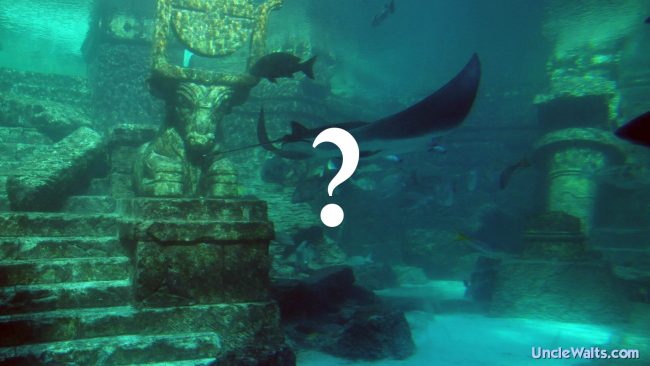 Local Orlando man Chuck Altuve thought he made the discovery of the century while on a recent visit to Epcot at the Walt Disney World Resort.

Mr. Altuve told Uncle Walt’s Insider about his find: “I was doing that dive quest thingy at the Nemo aquarium and as I was watching out for a shark who gave me the stink eye, I bumped into a huge temple looking thing! Turns out, I discovered Atlantis! I’m going to be rich!!!”

Not so fast, Chuck

We reached out to officials at the Walt Disney World Resort, and they released the following statement.

Walt Disney Parks and Resorts are proud to announce that as part of our efforts to bring fresh and popular ideas to our parks, The Seas with Nemo and Friends at Epcot will undergo a lengthy refurbishment to retheme the attraction to our hit movie series set in the “fictional” land of Atlantis! A recent survey suggested that guests are not able to connect with a fish and his friends, but they could relate to obscure, unknown characters that make huge scientific discoveries!

Guests will board a “Hydrolator” that takes them from Seabase Alpha to the submarine Ulysses, that is docked 20,000 leagues under the sea! Upon boarding the Ulysses, they will soon come under attack from the Leviathan. Guests will have to escape aboard “Seacabs” that will take them past an array of sea life, coral, and maybe even a native Atlantean, to Atlantis!

Once they arrive, guests can enjoy dining at an all new dining experience featuring local Orlando seafood and sponsored by Gorton’s; participate in Kelp Talk with Kidagakash; learn about the Florida Manatee, and shop for gifts at the Atlantean Markets.

Get your last visit with Nemo and Friends, as construction will begin in June 2018, with the opening of Atlantis with Milo and Friends scheduled for 2019.

Will Atlantis be so much more awesome than Nemo? Comment below!

March 12, 2018 by Walt in Florida
© 2020 Uncle Walt's Insider. All rights reserved. All images used with permission. Unless otherwise attributed, all images licensed under Creative Commons CC0 license. This site is protected by reCAPTCHA and the Google Privacy Policy and Terms of Service apply.