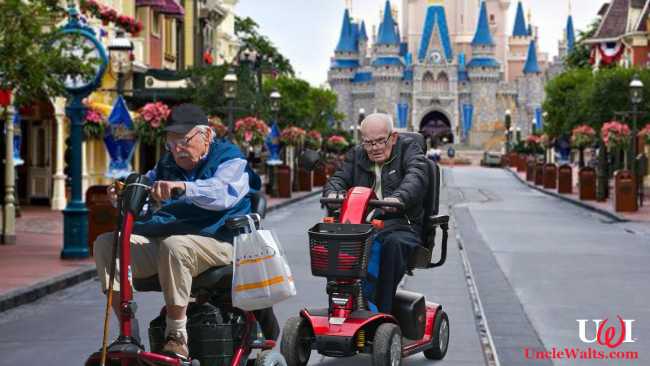 “Former friends” got a bit too competitive in the Magic Kingdom.

WALT DISNEY WORLD, FL — Leonard “Len” Henry, 69, and Webster Pryor, 71, are lifelong friends from Waterloo, Iowa. Or at, least they were friends, until they found themselves kicked out of the Magic Kingdom on Tuesday for “racing” their electric scooters down Main Street U.S.A.

“It wasn’t just the one incident,” says Disney Security Cast Member Clive Ainsworth. “We’d received multiple complaints from guests, and they’d been warned about weaving in and out of crowds, running into food carts, making parents yank strollers out of their way. It was just getting out of hand.”

Henry blames Pryor. “If that old coot didn’t think he always had to lead the way, this never would have happened. I know my way around Disneyland. World. Whatever it is.”

Pryor blames Henry. “I’m an ‘old coot,’ am I? He probably told you he was 69 years old, too, didn’t he? He’s been ’69’ for at least four years now. And yes, I lead the way, because Webster always gets us lost. We spent three hours wandering around the Magic Kingdom on Monday because he was trying to find the Matterhorn.”

Ainsworth says that the two are banned from returning to any Disney theme park on this trip, but they will be welcome to return in the future — but only separately. Meanwhile, as Pryor and Henry sulk in their hotel rooms, their combined families report that they are looking forward to enjoying Walt Disney World “without having Pappy and Gampa Len sniping at each other all the time.”

Does electric scooter drag racing sound as fun to you as it does to us? Comment below!

August 29, 2018 by Marty in Florida
© 2020 Uncle Walt's Insider. All rights reserved. All images used with permission. Unless otherwise attributed, all images licensed under Creative Commons CC0 license. This site is protected by reCAPTCHA and the Google Privacy Policy and Terms of Service apply.