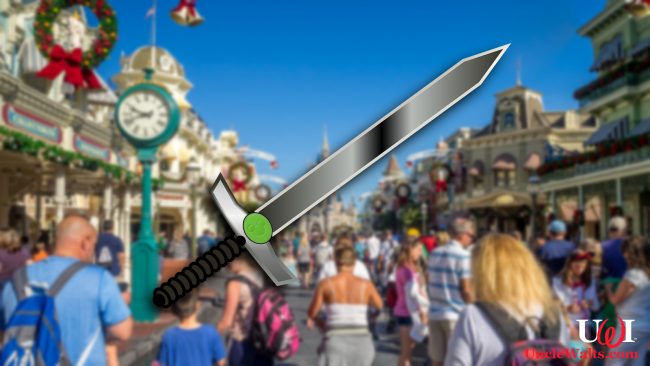 Or maybe they aren’t “replica” weapons?

WALT DISNEY WORLD, FL — The ban on replica weapons is apparently over! Disney has announced a brand new line of swords, which will be available in Walt Disney World gift shops as well as online.

These aren’t just any swords, though! These are MagicBand Swords® designed to carry Disney’s MagicBands®, and we think guests are going to love them®!

Disney (the company) spokesperson, Jun Disney (no relation) did caution guests who purchase the MagicBand Swords® to not carry them in the UK Pavilion.

“Brexit negotiations are still going on. So we do not have the proper agreements for guests to safely pass through the UK Pavilion carrying what they consider dangerous weapons — especially the chef’s knife. Until this is resolved, we recommend guests walk all the way around the World Showcase Lagoon if they wish to visit the France Pavilion. And then all the way back around to visit Canada.”

Look for these new accessories this holiday season at the Walt Disney World Resort!

Who is ready for sword fights on Main Street, U.S.A.? Let us know in the comments below!

November 21, 2019 by Walt in Florida
© 2020 Uncle Walt's Insider. All rights reserved. All images used with permission. Unless otherwise attributed, all images licensed under Creative Commons CC0 license. This site is protected by reCAPTCHA and the Google Privacy Policy and Terms of Service apply.