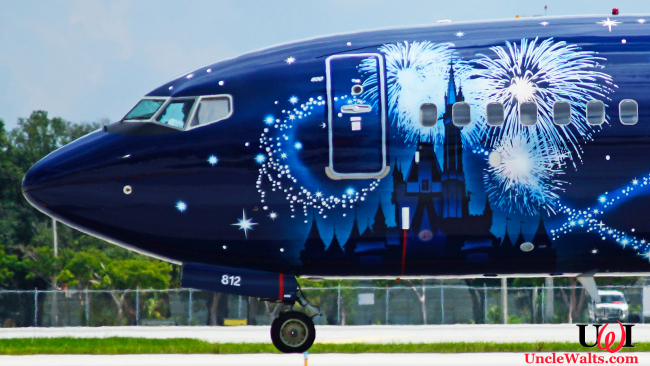 Why mess with those other airports, when soon you can fly directly to Walt Disney World!?

WALT DISNEY WORLD, FL — There’s so much construction going on at Walt Disney World these days, you can’t throw a disgusting cream cheese-filled pretzel out of the window of your gondola without hitting a unsuspecting construction worker in the head. Seriously, stock in the company that produces the work walls for Disney is up 113% this year alone! Much of this construction is new attractions and road improvement, but Uncle Walt’s Insider has learned about a new and exciting project on its way:

Walt Disney World is getting an airport!

Not the first runway

This is not the first time that Disney will be landing aircraft at Walt Disney World. The original STOL (which stands for “Storage for Trailers and Other Large items”) runway can be still seen from the air. But it resembles a Flying J truck stop more than a runway these days.

Now, it seems, Disney is ready to compete with Orlando-area airports directly. Recent postings to the Reedy Creek HOA community information board, located at the East Amenities Center, have alerted residents to be prepared for not only the additional construction, but also low-flying aircraft.

It is true that the airspace around Walt Disney World is a no-fly zone. A recent report reveals that three small aircraft, 27 unauthorized bird migrations, and one student on a broom who got lost on his way to Hogwarts were shot down by the U.S. Air Force in 2017 alone. Disney claims in one report that the no-fly zone is to protect the public, and in another report it is to preserve the magic. Uncle Walt’s Insider reached out to Disney (the company) spokesperson Jun Disney (no relation), for the real reason. Her response might just surprise you:

“The no-fly zone? Yeah, that’s to keep the competition out of our airspace. When Disney Airlines+ launches in early 2020, we’ll be able to control guest experience from the boarding announcement to the time you get off the plane AFTER your vacation has ended! And if you use our Minnie Van service to get to your hometown airport, then we can give you that Disney experience from your front door to ours!

“We’ll offer the typical cabin classes that you can find on other aircraft, but only with Disney Airlines+ will you able to enjoy (for an additional fee) character dining, dessert parties, reserved seating for fireworks, and an enchanted flight experience that we’re calling MyMagicalFlight++. Yes, two pluses!”

“Combine this exciting aviation experience with the Disney+ video streaming service launching in the Fall (with prices starting at just $6.99), and we’ll soon be able to give you the Disney experience 24/7!” Disney (no relation) exclaims.

“And just like in the parks, we’ll be able to bring Magical Moments™ right in your living room!

“I can see it now, you’re trying to relax after a long day at the office, slaving away to save up for your next Disney vacation, and one of our helpful DVC Cast Members starts to tell you all about our latest DVC property, with direct transfers from Disney International Airport+. You’ll know just how hard you have to work the next day to cover the costs! Truly magical!”

Are you ready for Disney 24/7 in your living room? Let us know in the comments below!

May 2, 2019 by Walt in Florida
© 2020 Uncle Walt's Insider. All rights reserved. All images used with permission. Unless otherwise attributed, all images licensed under Creative Commons CC0 license. This site is protected by reCAPTCHA and the Google Privacy Policy and Terms of Service apply.