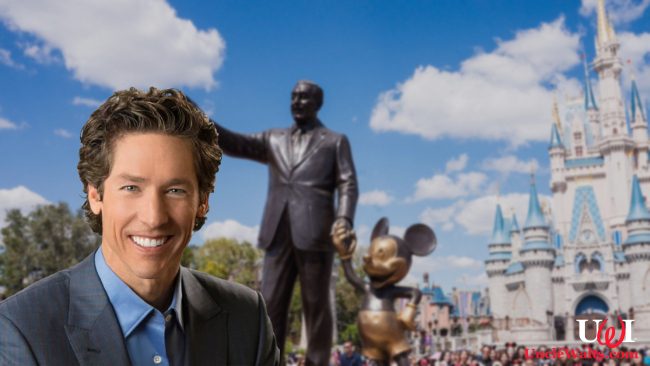 “It’s just magical — that’s my takeaway. The way Disney gets people to give them money. Magical.”

Was it the characters? The music? The churros? No — Osteen was greatly impressed by the way the resort makes money hand-over-fist.

“Disney just has an incredible way of bringing unity,” Osteen told Uncle Walt’s Insider. “I saw people from across the globe, from all walks of life, coming together for one purpose: to give the company money. It brought a tear to my eye.”

How do they do that?

Sources [Ed.: Hi, Fred!] close to the pastor revealed that Osteen had a grand time, and was impressed with how well Disney was able to market their brand and convince people to spend their hard-earned money year after year. He constantly asked Cast Members how much an average guest spent at their location, and how much Disney paid them.

Osteen also marveled at how nearly every exit landed guests into a gift shop, as well as the inflated prices guests seemed willing to pay for everything.

“The food, the clothes, the souvenirs,” Osteen exclaimed. “Everything is marked up. But the people are willing to pay! It’s just magical — that’s my takeaway. The way Disney gets people to give them money. Magical.”

Osteen returned to Texas with a host of ideas he could implement at Lakewood.

“We’ll probably start with the MyLakewoodExperience app and website,” said our source. “We already have gift shops at the church, of course, but we’ll soon start remodeling the hallways to force people to go through the shops. And we’re working on premium experiences that folks can pay for but cost us next to nothing, such as priority seating in the arena, dining packages, and character meals. And of course, we’re adding churro carts. Joel told me that when he bit into a churro, he felt the presence of God.”

Also in the works, according to our source? Pilgrimages to the Holy Land, with Osteen leading tour groups to Walt Disney World.

If Babylon Bee can stray from their lane, we can too! Do you agree? Comment below!

April 29, 2019 by Walt in Florida, Other
© 2020 Uncle Walt's Insider. All rights reserved. All images used with permission. Unless otherwise attributed, all images licensed under Creative Commons CC0 license. This site is protected by reCAPTCHA and the Google Privacy Policy and Terms of Service apply.