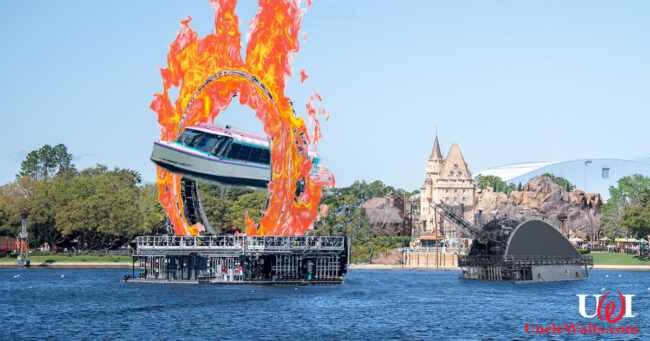 Hopefully it won’t burn, burn, burn any of the performers.

EPCOT, FL — As Disney continues work on the weather control barges at EPCOT, recent filings with the Reedy Creek Improvement District show that these barges have another purpose. It might be that they will also take part in a new nighttime show coming to EPCOT, known internally to Disney as “Harmonious.”

While the actual show name is being kept secret from the public, we have an idea of what to expect from this new show. Recent leaks to Uncle Walt’s Insider from Imagineering Headquarters in Glendale, CA, provide details, and we are proud to share the text of the leaked document below.

The text of the leaked document

“The calming, peaceful voice of Jim Cummings [Ed.: Best known as the voice of ‘Light Green Monster’ from Monsters, Inc.] bids everyone a good evening, and welcomes them to Epcot, and to World Showcase lagoon, where we’ve gathered around the fire. At the word fire, the giant ring bursts into flames, but is soon extinguished by spray from ‘Fantasmic-style’ water projection screens. This bit of foreshadowing is forgotten about until the end of the show.

“The grand finale of the show includes 18 water skiers, dressed as Captain Jack Sparrow. As they make their way around the lagoon, the music fades out, and you hear the voice of Johnny Cash, saying just the word ‘love’. Following a Shatner-esque pause, he continues, ‘is a burnin’ thing’, followed by another overly long pause, then, ‘and it makes’ (super long pause) ‘a fiery ring.’

“At this point, the ring magically erupts into flames again. The water skiers, now in a pyramid formation, release their ropes, and glide across the water toward floating barges. Then they will step onto the barges, recreating the opening scene from the Pirates of the Caribbean movie. The Friendship Boat previously towing the water-skiers will then turn and head towards the giant ring, while increasing its speed. Then, as the boat jumps through the fiery ring, huge fireballs and fireworks erupt from around the ring in a spectacular finale!”

We can’t wait to see this spectacle, as only one of Uncle Walt’s staff has ever been aboard a Friendship Boat when it jumped through a flaming hoop. We will post new details as we discover them!

Have you ever jumped a Friendship Boat at Epcot? Let us know in the comments below!

March 24, 2021 by Walt in Florida
© 2020 Uncle Walt's Insider. All rights reserved. All images used with permission. Unless otherwise attributed, all images licensed under Creative Commons CC0 license. This site is protected by reCAPTCHA and the Google Privacy Policy and Terms of Service apply.