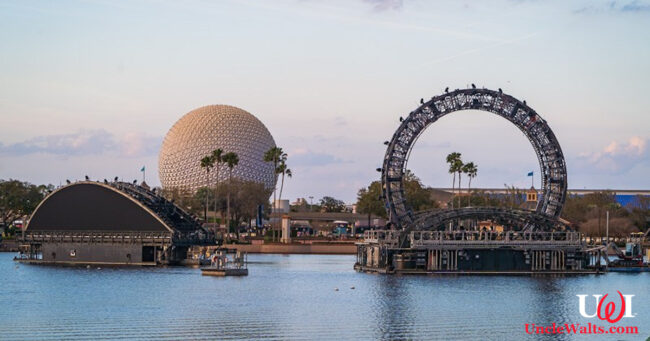 E.P.C.O.T. CENTRE, FL — As Disney struggles with the dome over Walt Disney World, they have made the bold move to bring the machines they use to control the weather into full view of guests.

The devices were originally thought to be part of a new nighttime spectacular rumored to debut at EPCOT [Ed.: Can’t believe fireworks were cancelled under this woke culture]. But Uncle Walt’s Insider can now confirm that the new structures in the World Showcase Lagoon are in fact part of the Disney Engineering Rain Program, started by Walt Disney after he discovered he can control the weather.

The Disney Engineering Rain Program, or D.E.R.P., has long been rumored. Although Disney continues to deny the program exists, internal documents from D.E.R.P. were discovered by Louann “Jack” Daniels, a waitress at the S. Apopka Vineland Rd Waffle House in Orlando, FL.

Daniels immediately reached out to the real media, but no one would return her calls. Then she asked Waffle House regular Marty if he knew any legitimate reporters. He said he didn’t, but would take the documents and find one. [Ed.: We’re going to have to eventually break up this relationship, she thinks Marty likes her, but really he only goes because she upgrades his hashbrowns to scattered, smothered & covered for free.]

After careful review of these documents, UWI can confirm the existence of D.E.R.P. and the weather-controlling machines. The devices are nicknamed “Pudge,” and their existence was teased in the failed Disney movie Lilo & Stitch when the main character, the little girl, named, uh, Lily? declares to her older brother, Steve, that Pudge controls the weather. Lily is referring to the D.E.R.P. weather-controlling devices. [Ed.: So do the devices run on peanut butter sandwiches?]

Our inside sources at Epcot tell us that the devices that have appeared in World Showcase are actually new machines, and will operate under the program name of “Harmonious,” which translates from Latin to do no harm. We will see them operate throughout the day ensuring that guests will have the perfect weather for their visit to the Walt Disney World Resort, Spa & Meteorological Centre.

Rumor is a guy named Ralph will now control the weather. What do you think? Let us know in the comments below!

March 3, 2021 by Walt in Florida
© 2020 Uncle Walt's Insider. All rights reserved. All images used with permission. Unless otherwise attributed, all images licensed under Creative Commons CC0 license. This site is protected by reCAPTCHA and the Google Privacy Policy and Terms of Service apply.