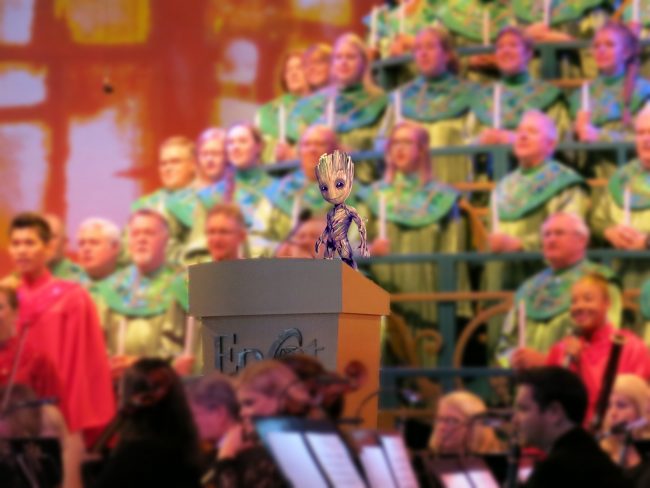 Some are calling this the Christmas miracle of the season! Eighty-seven guests attending last night’s 6:45 p.m. performance the Candlelight Processional at Epcot on December 7th were apparently fully healed, abandoning their ECVs (Electric Conveyance Vehicles).

For nearly 60 years Disney parks have told the biblical story of the birth of Jesus during the much-loved Candlelight Processional, which is performed on select nights at both Disneyland Park and Epcot. Each performance has a celebrity narrator that reads about the birth of Jesus, backed by local choral groups, a Disney cast member choir, members of the Voices of Liberty, and a large orchestra, all performing beloved Christmas carols. Over the years, celebrity narrators have included Mira Sorvino, Geena Davis, Gary Sinise, Laurie Hernandez, Steven Curtis Chapman, Baby Groot (pictured), and Jodi Benson. Ms. Benson, last night’s narrator, is being partially credited for this Christmas miracle.

Following the 6:45 p.m. performance of the Candlelight Processional last night, December 7, cast members clearing out the America Gardens Theatre were shocked to find over 80 ECVs without riders. Uncle Walt’s Insider spoke with cast member Laurence Thurstan about the find. Laurence was excited to speak with us and said, “It was the craziest thing I have ever seen! Normally we are picking up empty cups of hot cocoa, coffee, and beer, along with partially-eaten things like Mickey pretzels and pumpkin spice funnel cakes. But this time, we’re having to bring in a fleet of ECV tow vehicles!”

He continued, “I could tell you stories about the crazy things I’ve seen at EPCOT, especially with all of the drinking. I can only imagine what it will be like when the New Jersey pavilion opens. But this was like that movie, Left Behind. Except it was just the ECVs left, no clothes, and the people riding them just walked away.”

Jodi Benson, known as the voice of Ariel from The Little Mermaid, was the celebrity narrator that evening. Ms. Benson spoke her parts flawlessly, and her parting words to her family and those attending were some of the most heartfelt words this reporter has ever heard in his life. Many of the guests in the audience were visibly moved, with some wiping away tears. The Warszawski family, from Panna Maria, TX, said it was their “third-and-a-half” time to see the show. Patty Warszawski, the mom, told Uncle Walt’s Insider that this performance was different, “You could feel something different in the air. The way Judy Bunson told the story, and the liberty singing troupe. Wow, amazing! I noticed that after the performance, my bunions were not bothering me at all!”

Robert Millward of Hammond, IN, agreed with the Warszawski’s, “It was very moving. I’m a huge Jodi Benson fan, and I run a local fan club for Ms. Benson back home, called The Jodi Benson Fan Club. I know the name is not very original, but I just make automative seats for a living.”  Mr. Millward continued, “Anyway, something about the way Ms. Benson spoke the words about the birth of the miracle baby Jesus, it just moved me. I’m not religious, but I think I may start going to church every Sunday, not just at Christmas and Easter.”

A miracle, or something else?

Not everyone thinks there was a Christmas miracle. Skylar Sinclair, a 20-year-old student at the University of California at Berkeley, had a different perspective. “I’m spiritual and not religious. Honestly, those people who gave up their ECVs were probably just lazy and felt some guilt. But, I mean, even I felt SOMETHING, so I should maybe catch up to my parents and apologize for not speaking to them yesterday after they refused to buy me a bunch of things I wanted.” She paused for a moment, pulled her earbuds out, turned off her phone, and with a tear forming in her eye, she continued, “Maybe there is something about this show. About this Jesus.” We watched her walk away, catching up to her family, and give her parents a warm embrace.

Miracle or not, the Candlelight Processional is special for many guests visiting the Disney Parks this Christmas season. It can bring back memories from Christmas past, or create new, lasting memories. Perhaps that is the miracle. Families, friends, and strangers coming together to share in the joy of Christmas.

All of us here at Uncle Walt’s Insider want to wish everyone the most joyous holidays, the merriest Christmas, and the happiest New Year!

Did you experience a miracle at Candlelight? Let us know in the comments below!

December 8, 2017 by Walt in Florida
© 2020 Uncle Walt's Insider. All rights reserved. All images used with permission. Unless otherwise attributed, all images licensed under Creative Commons CC0 license. This site is protected by reCAPTCHA and the Google Privacy Policy and Terms of Service apply.