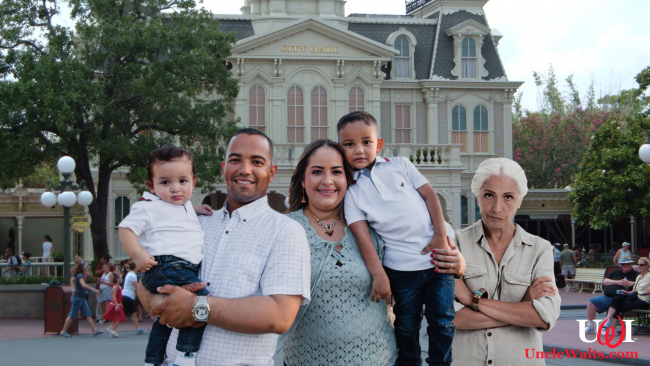 A “simple misunderstanding” is prolonged when the family keeps getting free stuff.

WALT DISNEY WORLD, FL — The Peña family of Silver City, NM, is celebrating their reunion with family matriarch Elvira Bolivar, after becoming separated from her at Florida’s Magic Kingdom theme park last week. Bolivar, 63, was located at the park’s Lost & Found in City Hall — after five days apart from her family.

“It started so simply,” says Bolivar’s son-in-law Oscar Peña Gimenez, 34, who was visiting Walt Disney World with his wife and two young sons. “We became separated when Mama Elvira didn’t want to ride Dumbo for a third time, so she went shopping. After we got off the elephants, we couldn’t find her.”

“So after we looked for a while,” Peña continued, “I went to find a Cast Member to see what I should do.”

They found Orlando native Teri working at a food cart.

“By this time our boys were crying — probably more because they needed a nap. I went up to the lady working the cart and said, ‘I’m sorry to bother you. We’ve just lost the boys’ grandmother…’

“I didn’t get to finish my sentence, because Teri went bug-eyed and started saying, ‘I’m so very sorry for your loss!’ over and over. And then she reached into the cart and pulled out four Mickey Bars, one for each of us, and said there was no charge for them. She said she hoped that Disney magic would help us make it through the day.”

Peña said he was confused.

“It wasn’t the help we needed, but hey, we do like Mickey Bars! So we found a shaded spot, ate the ice cream, got the boys cleaned up, and then went to find another Cast Member. The next one we talked to ran a churro cart. Yes, we got free churros! So after we finished those, we figured we might want to ask someone who didn’t work with food.”

The family went into a gift shop and came away with free t-shirts, hats, and Mickey Mouse stickers for the boys. And still no help finding Bolivar.

“I started to realize that it was a simple misunderstanding. And hey — I wasn’t lying. We really had lost her.”

Peña continued “asking for help” for the next several days, across all four theme parks, the water parks, and his resort hotel. The family came away with free meals, snacks, buttons, pins, stuffed toys, character visits, autographs & pictures, Fastpasses, a vouchers for miniature golf, several nights’ stay comped, and a discount coupon for a Disney Magical Funeral®. Finally, though, the free stuff came to an end.

“Oh, we could have kept it going longer,” says Peña. “But we had a flight home to catch, so we went back to Magic Kingdom’s City Hall and found her there waiting for us.

“You know, Mama Elvira hasn’t said anything to us yet, but I can tell she’s not happy. I kind of think I’m going to wind up regretting this, even with all the free stuff.”

We’d ditch a relative for free stuff, wouldn’t you? Let us know in the comments below!

May 10, 2019 by Marty in Florida
© 2020 Uncle Walt's Insider. All rights reserved. All images used with permission. Unless otherwise attributed, all images licensed under Creative Commons CC0 license. This site is protected by reCAPTCHA and the Google Privacy Policy and Terms of Service apply.