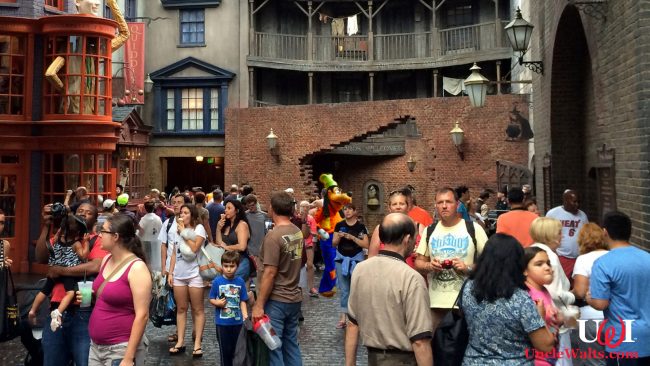 ORLANDO, FL — Popular man/dog/?? Disney character Goofy was spotted in the Wizarding World of Harry Potter at Universal Orlando on Sunday afternoon. A rare break in the wall-to-wall mass of bodies trying to make their way through Diagon Alley allowed several guests to glimpse Goofy strolling past Weasley’s Wizarding Wheezes.

“I tried to follow him and get a better picture,” Pikeville, Kentucky, resident Sam Husna told Uncle Walt’s Insider. “But the crowd was moving away from him, so I had no choice but to go with the flow. I lost sight of him pretty quickly. And also my kids.”

“At this time I can neither confirm nor deny that any Disney character was at any rival park,” Disney (no relation) said. “Nor can I confirm or deny that plans are underway for the Walt Disney World Resort to annex the land that Universal sits on in a hostile takeover bid, and that Goofy was there on a scouting mission. Not that you asked. But I can’t confirm that at all. Or deny it. Really, don’t even print or suggest that. It’s not happening. Or maybe it is. I should stop talking.”

Should we be worried? Should Goofy? Let us know in the comments below!

Cover photo of Goofy at the Wizarding World of Harry Potter by Jared [CC BY 2.0] via Flickr, modified.

July 23, 2018 by Marty in Florida
© 2020 Uncle Walt's Insider. All rights reserved. All images used with permission. Unless otherwise attributed, all images licensed under Creative Commons CC0 license. This site is protected by reCAPTCHA and the Google Privacy Policy and Terms of Service apply.