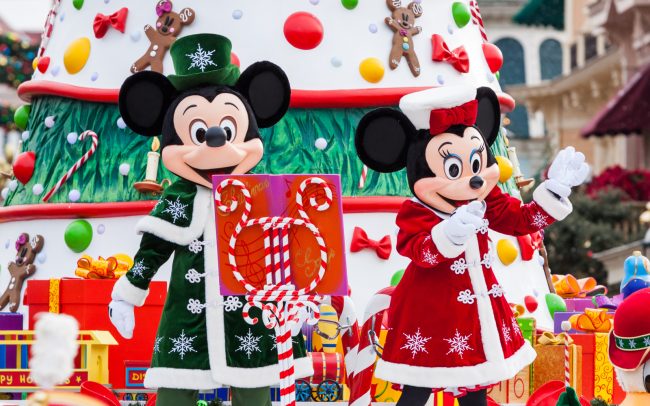 Disney Parks and Resorts are magical all year round, but there’s something special about the holiday season that brings out Mickey’s very best! Here are some of our favorite Disney Christmas traditions:

8. There’s only one Santa – Disney is known for keeping things real — that’s why you’ll never hear them talk about Mickey or their other beloved characters as if someone is in costume playing a part. And they extend that same magic to the Jolly Old Elf himself, Santa Claus! You’ll never find Santa appearing in more than one park or location at any given time, because there is only one Santa, of course! This holds true worldwide — if Père Noel is appearing anywhere at Disneyland Paris, you won’t find a single Santa in public at Walt Disney World or Disneyland at the same time!

7. The Candlelight Processional uses the King James Version – Few Christmas concerts anywhere in the world rival the beauty and majesty of Disney’s Candlelight Processional, held on one special weekend at Disneyland Resort in California and throughout the holiday season in Florida’s Epcot. A cast member choir joins guest high school singers and a full orchestra to sing Christmas favorites, interspersed with a celebrity narrator reading about the birth of Christ from the King James Version of the Bible. To us, it’s just not Christmas without hearing all those “thees,” “thous,” and “begats.” Agree-eth thou?

6. Hidden Grinches – We travel to California Adventure for this one, where Disney Imagineers really up their game by converting each and every “Hidden Mickey” in the park to a “Hidden Grinch.” The transformation happens overnight, and it’s always a thrill to see the joy in children’s eyes as they spot the silhouette of their favorite green holiday bad guy throughout the decorations.

5. Eating the gingerbread houses – Several locations in the Walt Disney World Resort are known for their magnificent gingerbread creations, the largest of which are located in the Grand Floridian Resort and Spa, the Beach Club Resort, and the Contemporary Resort. But did you know that these gingerbread houses are not only edible, but some lucky guests get to eat them? That’s right! On the second weekend in January each year, when the other holiday decorations are coming down, cast members set up ropes around the gingerbread houses where eager guests gather. At a signal, the ropes drop, and guests charge the tasty structures and tear them apart, helping themselves to all the gingerbread they can eat. What a yummy tradition!

Our top four faves are on the next page!! Click below!

Page 1 of 212»
December 22, 2017 by Marty in California, Florida, World
© 2020 Uncle Walt's Insider. All rights reserved. All images used with permission. Unless otherwise attributed, all images licensed under Creative Commons CC0 license. This site is protected by reCAPTCHA and the Google Privacy Policy and Terms of Service apply.