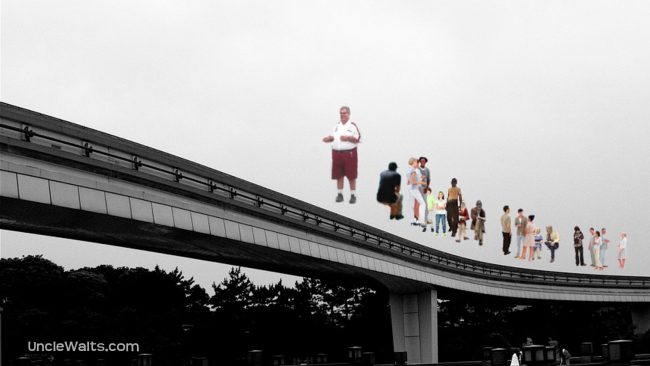 Little more than a week after plans were leaked about a possible new “convertible monorail” design coming to Walt Disney World Resort, the Disney company has surprised everyone with a totally unexpected addition to the fleet: an entirely transparent monorail train. The new “Monorail Clear” debuted on Saturday.

A new addition to an aging fleet

The Walt Disney World monorail system, one of the most heavily-traveled in the world, has twelve trains operating on three continuous loops. The “Mark VI” trains were placed into service in 1979, and are distinguished from each other by a colored stripe down the sides of each train. Disney cast members and fans refer to the trains by their colors (Red, Green, Lighter Green, Peach, Coral, Marlin, Nemo, Gray, Grey, Silver, Gold, Frankincense, and Myrrh).

Until now, that is. Joining the fleet of twelve is an entirely new train which has no color stripe. In fact, it has no color at all.

The new Monorail Clear combines modern transparent polymer manufacturing processes with stealth technology, resulting in a train that cannot be seen with the naked eye. The unveiling of the new train was evidently pushed up after video of an open door aboard Monorail Red showed that Disney was experimenting with new “open air travel” experiences for its guests.

“I think it’s amazing,” Disney World guest Marcelino Rocha, 35, of Flagstaff, Arizona, told Uncle Walt’s Insider, “but problematic. Once you’re on board the train, it’s an incredible experience. You’re floating over the tracks, cruising above World Drive and Epcot. Absolutely thrilling — it really lives up to the ‘highway in the sky’ slogan.

“But that’s after you’re on board. Until then? It’s a nightmare. The cast members at the station had trouble telling when the train was arriving, and once it’s there, you have to kind of feel your way through the opening and onto a seat. There were a lot of people running into the invisible poles, and I saw at least one person walk all the way through the compartment and exit out the other side without realizing it.”

Rocha predicts guests will get used to it, however. “It’s just an adjustment. They may have to modify that ‘Please stand clear of the doors’ announcement, though, since you can’t see the doors.”

What do you think of this new technology? Let us know in the comments!

January 22, 2018 by Marty in Florida
© 2020 Uncle Walt's Insider. All rights reserved. All images used with permission. Unless otherwise attributed, all images licensed under Creative Commons CC0 license. This site is protected by reCAPTCHA and the Google Privacy Policy and Terms of Service apply.