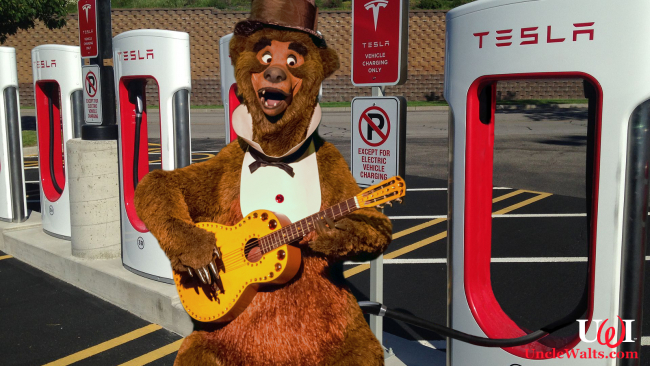 Pirates, bears, princesses and presidents all need a boost now and then.

ORLANDO, FL — Tesla has tens of thousands of “Supercharger” stations around the country and around the world. Each is supposed to be reserved for Tesla vehicles, but drivers have reported seeing some “familiar characters” hooked up to the devices.

“I’m a Disney fan, an Annual Passholder, and I drive a Tesla Model S,” says Orlando native Avery Ware. “So it was a surprise to plug in at my favorite Supercharger location — it’s in the parking lot of a Wawa, so I can shop while my car charges — and see a Disney animatronic plugged in.”

A variety of characters

“That first one was Captain Barbossa from the Pirates of the Caribbean ride,” Ware continues, “but there have been others. I’ve seen Country Bears, Ursula from the Little Mermaid, John Adams from Spaceship Earth, and Anna and Elsa from Frozen Ever After, too. Once I even saw President Trump plugged in as I drove by, but I didn’t stop to see if it was the animatronic from the Hall of Presidents or the real one.

“Oh, and there’s always an unmarked white van parked nearby. I can see there is someone in the driver’s seat wearing an oval nametag, but he never opens the door or rolls down the window to talk to me.”

We reached out to our usual favorite Disney (the company) spokesperson Jun Disney (no relation), but she was unwilling to talk at length. “We have an account, and each character is registered as a Tesla vehicle,” Disney (no relation) said. “Model ‘A.’ And we get better electricity rates from Tesla than from Reedy Creek. Don’t tell them I said that.”

How often do you recharge your animatronics? Let us know in the comments below!

Cover photo: Tesla charges a bear. Photo by HarshLight [CC BY 2.0] via Flickr.

January 29, 2019 by Marty in Florida
© 2020 Uncle Walt's Insider. All rights reserved. All images used with permission. Unless otherwise attributed, all images licensed under Creative Commons CC0 license. This site is protected by reCAPTCHA and the Google Privacy Policy and Terms of Service apply.