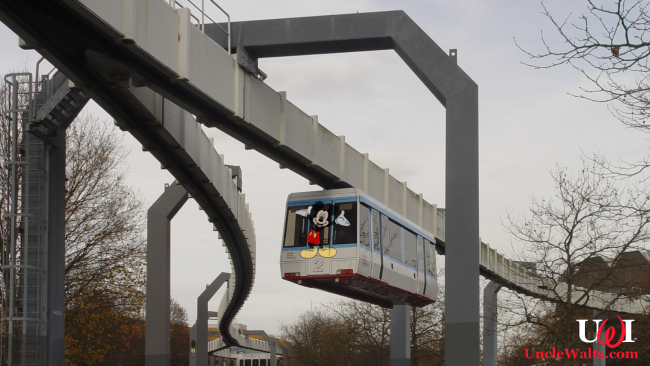 WALT DISNEY WORLD, FL — As guest attendance numbers continue to climb at The Most Magical Place on Earth, Walt Disney World Resort officials struggle to manage the crowds. One solution, of course, is to raise prices and make the place way too expensive for the riff raff.

While that program is underway and shows some success, there’s still the issue of what to do with the people who still show up. Disney so far has experimented with boats, buses, gondolas, tuk tuks, Minnie Vans, rickshaws, and just plain making people walk.

The undisputed guest favorite is, of course, the monorail system. Those trains, built in 1971 and expanded to Epcot in 1982, have their limits. But now Disney has apparently hit upon a way to double the monorail system’s capacity with little effort.

“It’s so simple,” says Disney (the company) spokesperson Jun Disney (no relation). “I can’t believe no one’s hit on the idea before. We’re just going to get some new trains that hang below the tracks. Boom, twice as many people can ride.”

Orders for the new hanging monorail trains have just been placed. Disney (the company) expects them to be in action by next year, according to Disney (no relation). Uncle Walt’s Insider will keep you posted.

Will you ride the new hanging monorail trains? Let us know in the comments below!

January 24, 2019 by Marty in Florida
© 2020 Uncle Walt's Insider. All rights reserved. All images used with permission. Unless otherwise attributed, all images licensed under Creative Commons CC0 license. This site is protected by reCAPTCHA and the Google Privacy Policy and Terms of Service apply.