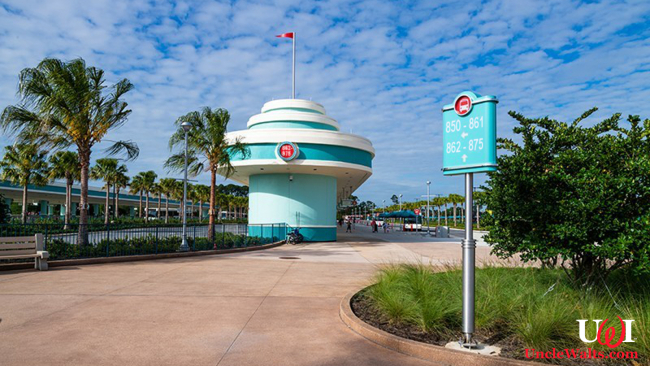 A record number of bus stops is needed to handle record crowds.

WALT DISNEY WORLD, FL — Massive crowds are expected at Disney’s Hollywood Studios when Star Wars: Galaxy’s Edge opens in August. But the park will be ready — not just for the guests in the park but for their arrival.

In addition to adding the new Skyliner gondola system, and building additional parking lots that stretch to southern Osceola County, the park has added bus stops. Lots and lots of bus stops.

“We got word a long time ago,” says Disney (the company) spokesperson Jun Disney (no relation), “that hundreds of Star Wars fan clubs around the continent would be chartering buses. They all want to see the new Star Wars area! Add to that the usual bus stops needed to handle Disney transportation, local hotels, the Knight Bus, Orlando GoLynx buses, Turimex buses from Mexico, and also the internal bus-stop-to-bus-stop shuttles, and, well…. You do the math. We need a lot of places for guests to load and unload.”

The final number of bus stops is close to three thousand, according to Disney (no relation).

The outer stops are pretty far away from the entrance. So if you are let off at a bus stop numbered 2300 or higher, it is actually closer to walk to the Art of Animation Resort and take a Disney bus back to the Studios!

How many bus stops is too many? Let us know in the comments below!

April 2, 2019 by Marty in Florida
© 2020 Uncle Walt's Insider. All rights reserved. All images used with permission. Unless otherwise attributed, all images licensed under Creative Commons CC0 license. This site is protected by reCAPTCHA and the Google Privacy Policy and Terms of Service apply.