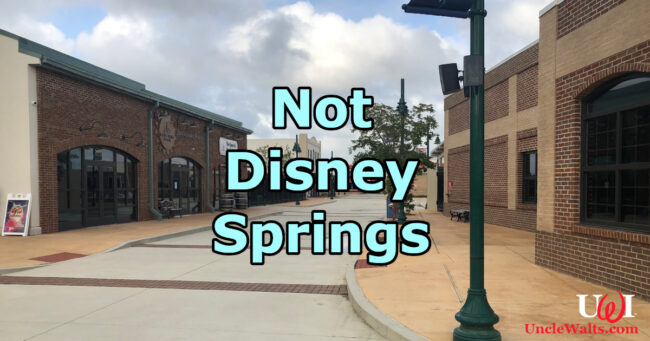 Hey, we get some things right, occasionally.

DISNEY SPRINGS, FL — Uncle Walt’s Insider previously reported that no one is going Disney Springs in spite of it being open for business. It turns out that might have not been 100% correct. Or 50% correct. Or at all correct.

It was a big misunderstanding. Our own Uncle Walt drove to Orlando for over 48 hours straight (the drive from Svalbard is pretty long) and thought he had arrived. In his sleep-deprived state, he thought that OWA, a park and entertainment/shopping district in Foley, AL, was Disney Springs.

OWA is open, both the park and the shops, but no one is really going to the shops. We must humbly ask forgiveness from both of our readers for this mistake. Please write to us here to let us know you got our apology.

Also, before anyone states it was irresponsible for Uncle Walt to stay up for 48 hours driving, he wasn’t the one doing the driving. The drivers switched off for rest, he just stayed up the whole time. We would like to apologize for any Disney “news” sites that we may have offended, with one exception: WDWNTT.

What locations have you mistaken for Disney Springs? Let us know in the comments below!

Cover photo: Downtown OWA in Foley, AL, which looks exactly like Disney Springs if you’ve been up for 48 hours. And squint. Photo by Walt, used without permission but with some snark.

June 13, 2020 by Walt in Florida
© 2020 Uncle Walt's Insider. All rights reserved. All images used with permission. Unless otherwise attributed, all images licensed under Creative Commons CC0 license. This site is protected by reCAPTCHA and the Google Privacy Policy and Terms of Service apply.