"Open" Disney Springs a ghost town; no one is there - Uncle Walt's Insider

“Open” Disney Springs a ghost town; no one is there 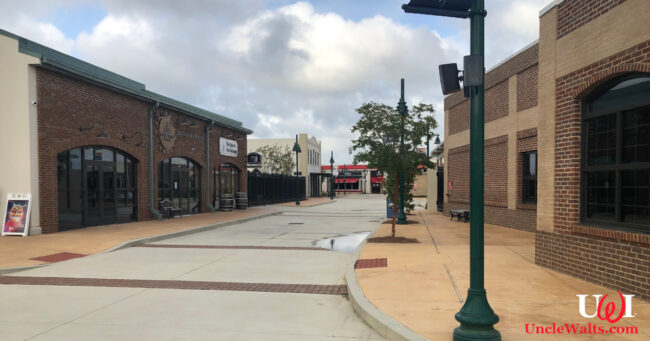 Serious. Like, nobody. Cast members, shoppers, looters. We weren’t even there.

DISNEY SPRINGS, FL — Disney Springs announced their reopening in May, and the Internet nearly shutdown in excitement. Most assumed that the Walt Disney World shopping district (so called because you can’t buy stuff anywhere else on WDW property) would be packed.

Well, May 20th has come and gone, and despite initial reports from fake news sites (such as WDWNTT), no one is actually going to Disney Springs. It is empty. There aren’t even people working there, mostly.

Our own Uncle Walt recently visited Disney Springs, and found that stores were mostly closed. Any operating restaurants were offering specials, all-day happy hours, and more, to get guests to come in. Stores that remained closed removed any signage, and covered their windows as well.

It was a ghost town, with just a handful of people walking around the shops. Uncle Walt reports he was able to walk in, without temperature checks, and did not wear a mask. “There was simply no one there to check!” he said.

We at Uncle Walt’s are ready for Disney to reopen as much as the next guy, but irresponsible reporting, use of doctored, or older photographs of locations to sell the narrative goes against everything we stand for at Uncle Walt’s! We believe this scandal goes beyond one website, but is a collaboration with numerous Disney “news” sites to spread a false narrative.

We will continue to investigate this breaking story and report back.

Who do you think writes the most fake news? Let us know in the comments below!

Cover photo: Ghost town? I think not. It doesn’t even have real ghosts, like the Haunted Mansion, or Turtle Talk with Crush. Photo by Uncle Walt, used without permission.

June 12, 2020 by Walt in Florida
© 2020 Uncle Walt's Insider. All rights reserved. All images used with permission. Unless otherwise attributed, all images licensed under Creative Commons CC0 license. This site is protected by reCAPTCHA and the Google Privacy Policy and Terms of Service apply.