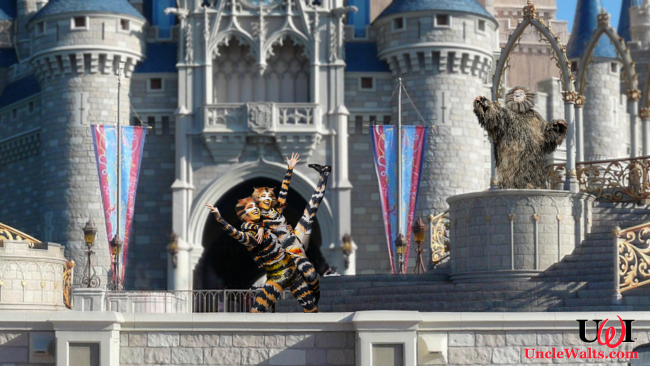 “It’s actually a Cast Member production from start to finish,” says Disney (the company) spokesperson Jun Disney (no relation). “Some Entertainment CM’s threw the show together in their spare time — Disney doesn’t work them very hard — and just performed it to entertain themselves and other Cast Members.

“Then we brought Hamilton to Hollywood Studios, and of course that’s a huge success. So the company was looking to bring a little of that Broadway magic to the Magic Kingdom. And here we had a production all ready to go!”

“Sorry, wish I could tell you more now,” she said, “but we have a show in two hours, and it takes a while to get made up as Bombalurina!”

You thought she’d be Rumpleteezer, didn’t you? Let us know in the comments below!

February 23, 2019 by Marty in Florida
© 2020 Uncle Walt's Insider. All rights reserved. All images used with permission. Unless otherwise attributed, all images licensed under Creative Commons CC0 license. This site is protected by reCAPTCHA and the Google Privacy Policy and Terms of Service apply.