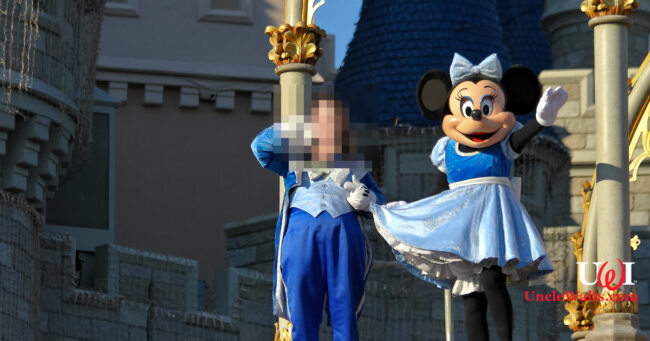 Warning to anyone who believes the theme park characters are real and not humans in a costume: don’t read this article. Or this warning.

“The unnamed Cast Member [Ed.: Fabiana Cooper] misunderstood the new rules,” said Disney (no relation). “We had announced that masks were no longer required throughout Walt Disney World, except on public transportation. This particular Cast Member [Ed.: Ms. Cooper] thought that meant even the costumed characters did not have to wear their usual head gear.

“And because you-know-who [Ed.: you-know-who] ‘works with’ Mickey Mouse, she caused a bit of a stir when she came onstage without wearing Mickey’s head.”

Dozens of guests, if not hundreds, were traumatized before Ms. Cooper was ushered offstage.

Because of the trauma, Disney (the company) is breaking out its memory erasure technology, last used after Cinderella Castle partially deflated. The company has promised to provide free churros to any guests who still remember the incident after “treatment.”

“In the Cast Member’s defense,” Disney (no relation) allowed, “Mickey is fully vaccinated, and wasn’t on Walt Disney World transportation at the time. The rule probably should have been a little clearer.”

Did you ever wear an animal head in place of a medical mask? Let us know in the comments below!

Cover photo: Someone got a little carried away with the “no mask” celebration! Photo by Carlos [CC BY-NC 2.0] via Flickr.

June 19, 2021 by Marty in Florida
© 2020 Uncle Walt's Insider. All rights reserved. All images used with permission. Unless otherwise attributed, all images licensed under Creative Commons CC0 license. This site is protected by reCAPTCHA and the Google Privacy Policy and Terms of Service apply.