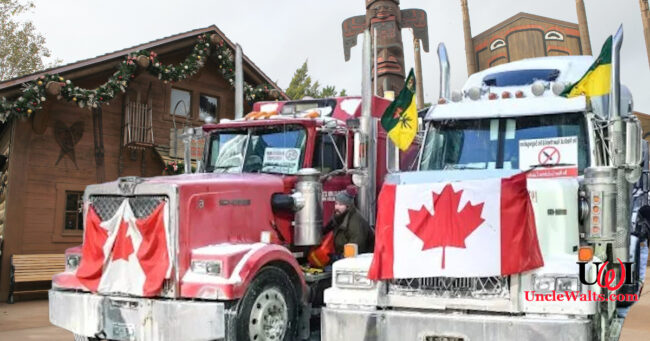 “We got the idea from our wonderful dictator, I mean, Prime Minister,” said trucker Léonel Legrand of Montreal. “We learned from reliable sources that he was hiding here when we were in Ottawa. So after we got the boot from there, we came down here.

“After all, the Canada Pavilion at Epcot is just like home. Just slightly less polite, eh?”

Guests interviewed by Uncle Walt’s Insider had mixed responses to the presence of the protests.

“I’m all for it,” said guest Mildred Feher. “They’re super nice, so I’ve been bringing them fuel and churros. And they at least try to honk in time with the music during Harmonious!”

“The honking’s not a problem — I grew up in Brooklyn. But it’s not easy trying to squeeze past all the trucks, especially inside the Circlevision theater.”

How did they get across the border, we wonder? Let us know in the comments below!

February 19, 2022 by Marty in Florida, World
© 2020 Uncle Walt's Insider. All rights reserved. All images used with permission. Unless otherwise attributed, all images licensed under Creative Commons CC0 license. This site is protected by reCAPTCHA and the Google Privacy Policy and Terms of Service apply.