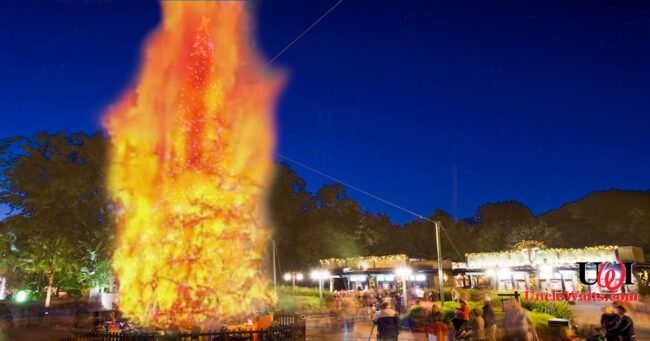 WALT DISNEY WORLD, FL — Disney’s Animal Kingdom Theme Park, Conservation Center, and Animal Spa has always included environmental awareness in its mission. Guests not only experience animal-themed entertainment, but they also learn about the world, delicate ecosystems, and mankind’s responsibility to our planet and other species.

Well, they did until Rafiki’s Planet Watch was shut down. But hey, now we have blue aliens.

Even so, yesterday Disney made a bold statement about the dangers of climate change by setting fire to the Animal Kingdom’s iconic holiday tree.

A fiery passion for the planet

Disney (the company) spokesperson Jun Disney (no relation) gave us the details.

“We want people to be aware that the climate is changing,” Disney (no relation) said. “Computer models show that we need to act immediately, or in ten years it will be too late to make a change. In fact, they’ve been showing that for 40 years, so we know they’re accurate!”

So, how does burning the Christmas tree help battle climate change, we asked?

“It’s… uh… because, you know, if the, uh, temperature goes up, um, by a degree or two,” Disney (no relation) stammered, “then, your trees will spontaneously burst into flame. Or something.

“Hey, they just pay me to read this crap, not to try to make it make sense.”

What should they burn next? Let us know in the comments below!

December 9, 2021 by Marty in Florida
© 2020 Uncle Walt's Insider. All rights reserved. All images used with permission. Unless otherwise attributed, all images licensed under Creative Commons CC0 license. This site is protected by reCAPTCHA and the Google Privacy Policy and Terms of Service apply.