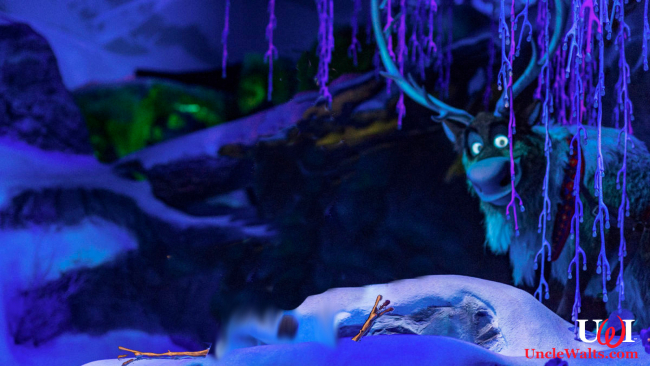 Last heard saying, “Some people are worth mel-glblblb…”

WALT DISNEY WORLD, FL — The Norway Pavilion in Epcot’s World Showcase experienced an air conditioning outage on Sunday. But what would have been a mere inconvenience in most places quickly turned to tragedy as beloved snowman Olaf has disappeared.

The Norway Pavilion is home to the popular “Frozen Ever After” boat ride, which is appropriate because Norway is a real Scandinavian country, and the movie Frozen is set in the fictional country of Arendale, which kind of looks Scandinavian-ish. (Apologies to our friends in the Uncle Walt’s Norwegian Fan Club.) The ride features all of the movie’s favorite characters, such as Grand Pabbie, Oaken, Gerda, and Spanish Dignitary. [Note: find out which characters are the popular ones. Hard to tell from the IMDb listing.] [Ed.: Maybe watch the movie sometime?]

Apparently there’s also a talking, singing snowman named Olaf in the ride — or at least, there used to be. Sources report that temperatures reached in excess of 120 degrees (Farhenhi… fahrinhee… farfugn… … not Celsius) inside the show building, forcing a temporary closure of the attraction.

When the ride reopened, Olaf was nowhere to be seen. Uncle Walt’s Insider is, as always, on top of this story, and will post any updates as to the whereabouts of Olaf as information becomes available.

Update: Olaf still has not returned to the attraction, but an anonymous custodial cast member named Danuta Basso reports that Olaf was last seen “in my mop.”

Where could Olaf be? Let us know in the comments below!

August 27, 2018 by Marty in Florida
© 2020 Uncle Walt's Insider. All rights reserved. All images used with permission. Unless otherwise attributed, all images licensed under Creative Commons CC0 license. This site is protected by reCAPTCHA and the Google Privacy Policy and Terms of Service apply.