Ask a Cast Member: "What time is the 3 o'clock parade?" - Uncle Walt's Insider

Ask a Cast Member: “What time is the 3 o’clock parade?” 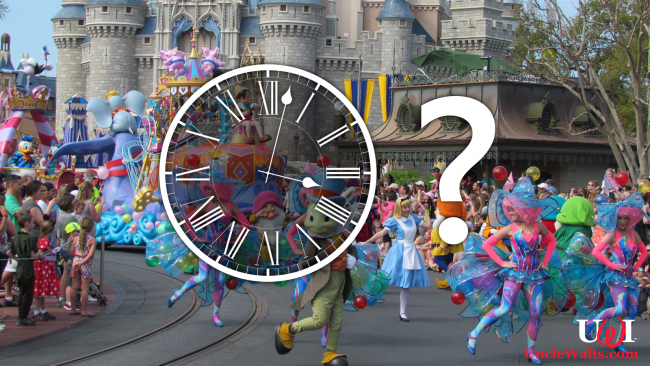 Here’s another ongoing article series we just made up.

BAY LAKE, FL — If you read any Disney message board or Facebook group, or talk to Cast Members, sooner or later this question comes up: “What’s the stupidest question you were ever asked?” The inevitable response is “What time is the 3 o’clock parade?”

Which makes you wonder… Are theme park guests really that stupid? [Ed.: Yes.] Are they just confused? [Ed.: Also yes.] Or do they really just want to know what time the parade passes their location? [Ed.: This is the official answer, one that is provided to Cast Members during training.]

Yep, we went there

Several of your favorite Uncle Walt’s Insider writers were sitting around the newsroom, struggling to come up with good ideas. [Ed.: It’s hard to crank out top-quality, award winning satire day after day. But we do it!] So we decided the best way to meet our deadline would be to do a quick reaction article. In this case, we’d send a reporter out into one of the Disney parks, have them ask this question to various actual, for-real Cast Members, and record the responses.

Here are the best responses we received. Each response you see below is from a different Cast Member.

UWI: “What time is the 3 o’clock parade?”
CM (Pat, from Orlando FL): “Should be coming by in just a few minutes”

UWI: “What time is the 3 o’clock parade?”
Disney Spokesperson Jun Disney (no relation): “Ugh. You guys again? Just leave me alone! I’m supposed to be on vacation this week!”

What time do you think the 3 o’clock parade is at? And just how many Cast Members named “Chris” are there? Comment below!

February 7, 2019 by X in Florida
© 2020 Uncle Walt's Insider. All rights reserved. All images used with permission. Unless otherwise attributed, all images licensed under Creative Commons CC0 license. This site is protected by reCAPTCHA and the Google Privacy Policy and Terms of Service apply.