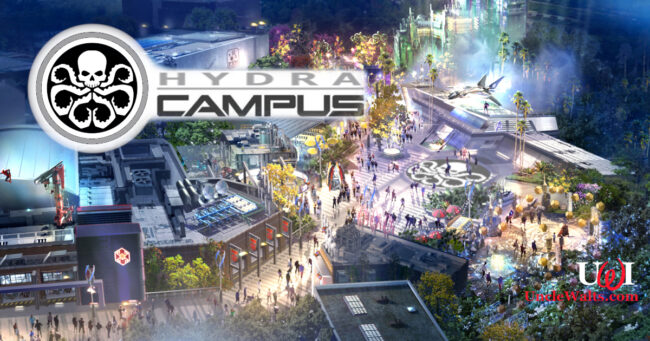 We suspect the campus was already infiltrated.

ANAHEIM, CA — Uncle Walt’s Insider has learned that the Avengers Campus at California Adventure will soon close and be rebranded as “Hydra Campus.”

While this may shock to those who enjoyed Avengers Campus, dismal feedback from a poll is behind the change. We reached out to Disney (the company) Spokesbabe Jun Disney (no relation) to find out more.

“We normally target these sort of marketing surveys,” Disney (no relation) told us, “but in this day and age, we felt that might discriminate against certain people. So we mailed out a ballot, I mean survey, to everyone. I mean, literally everyone, every address we could find in California. We received back record numbers, and the clear result showed that Hydra is way more popular than the Avengers. So Bob ‘Bob‘ Chapek issued the orders and set Imagineering to work on the new Hydra Campus.

“We did have a few Cast Members mention the surveys choosing Hydra all appeared to be coming from the same post office, and looked to be duplicated mechanically, but this is California. We don’t question results of surveys, polls, or elections around here! Our methods are 100% secure and no way can anyone defraud our own survey system!”

Uncle Walt’s Insider couldn’t stop there, so our very own beloved leader (seriously, one of the greatest guys you’ll ever meet), Uncle Walt [Walt: Oh, come on guys, you’re going to make me blush!], set out to Disneyland to discover more. Here is what he found.

“Well, there I was, six churros in on our first day, as I walked toward The Collectors Fortress. I stopped there first, experienced the attraction, and then asked the guests – would this be better with some sort of Hydra theme instead? Not one person agreed!

“When I pressed further and showed the results of the polls, one woman started to yell at me, in what I think may have been Portuguese, I’m not sure. I pressed further into Avengers Campus and found yet another food cart. I talked with a few guests while we enjoyed a Shawarma, again asking about Hydra. Again I was met with resistance. I visited Web Slingers, chatted it up with Captain America, saw Spiderman swing and fly through the air, trained alongside the Warriors of Wakanda, even got a chance to talk to Loki. He seemed to like the idea of a Hydra Campus.

“Loki aside, I thought I would never find an actual guest who liked the idea. But then a man with a thick German accent pulled me aside, threatened me, and told me to stop asking questions. The worst part is, he threw my churro to the ground. Who does that to a churro???”

You all know that Uncle Walt wrote this one, right? Let us know in the comments below!

October 20, 2021 by Walt in California
© 2020 Uncle Walt's Insider. All rights reserved. All images used with permission. Unless otherwise attributed, all images licensed under Creative Commons CC0 license. This site is protected by reCAPTCHA and the Google Privacy Policy and Terms of Service apply.