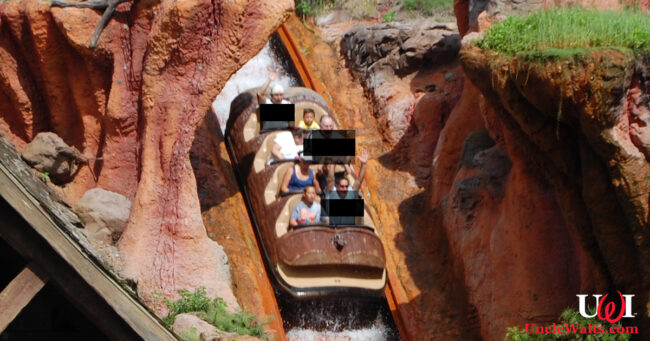 If the new attraction looks like Mardi Gras, “flashing” will actually add to the realism.

GLENDALE, CA — The Internet nearly shut down recently after news that Disney would be re-theming Splash Mountain to The Princess and the Frog, the story of Tiana, princess of New Orleans. [Ed.: It’s been a while since we watched it.]

Now that the dust has settled and keyboard warriors everywhere have been distracted by other news, details are coming out about what we can expect from the new attraction. Below is just a short list of what we’ve discovered on a recent dumpster dive at 1401 Flower St. (headquarters of Disney Imagineering).

The attraction will be set around a Mardi Gras. Consequently, Disney will no longer utilize Cast Members or Artificial Intelligence to remove photos of women who “flash” the camera on the big drop. (If you aren’t familiar with “flashing,” uh… go ask your dad.)

In fact, it is just the opposite. Guests will be encouraged to flash the camera, as other guests gently toss beads off the bridge to the lucky recipients on the attraction below. This is a huge shift from the old standing rule that forbids guests from throwing things to people on attractions. Beads will be available for purchase at Mama Odie’s Daiquiris-to-go Store & More.

Ride enhancements will include changes to the audio-animatronic characters themselves. The outdated, racist programming of the animatronics will finally be removed and destroyed, along with any other reference to the previous movie or its theming of the ride. Imagineers also plan on lifting the entire ride and rotating it 90 degrees to ensure they even remove the original skyline.

To give an authentic New Orleans feel, Dr. Facilier, aka the Shadow Man, will walk around the area, betting guests he can guess where they got their shoes. Other Cast Members will also sell artwork, give palm readings, and offer exciting games of Three Card Monte!

Dining options are also coming, but not Tiana’s Palace; Disney has opted to go with a third party vendor. The famed Brennan’s will operate a new eatery coming to the Disney parks, with views inside the attraction. And of course they will be offering their world famous Bananas Foster! Famed beignet vendor Cafe du Monde will also have a counter service setup offering coffee and beignets.

To make these changes possible, Disney will redirect the budget from new attractions that were previously announced, such as the remodeling of Epcot.

Will they move Disneyland’s Space Mountain to New Orleans Square? Let us know in the comments below!

July 3, 2020 by Walt in California, Florida
© 2020 Uncle Walt's Insider. All rights reserved. All images used with permission. Unless otherwise attributed, all images licensed under Creative Commons CC0 license. This site is protected by reCAPTCHA and the Google Privacy Policy and Terms of Service apply.