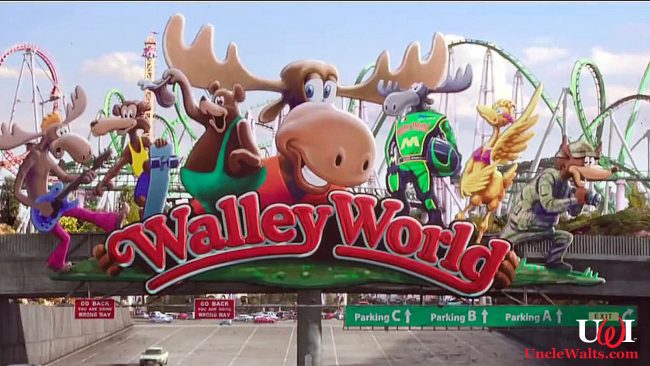 California’s first non-berry or -mouse related theme park is up for sale.

Uncle Walt’s Insider is happy to announce that none of those will be needed. Sources tell us that the Disney Company is looking to acquire L.A.’s famous Walley World park.

“It solves so many problems,” one of the Juns says. [They sound alike.] “It’s a de facto third gate for Disneyland, brings Marty Moose and all the beloved Walley characters into the Disney stable, and makes the Walley family a ton of money. Cha-ching!” [Okay, it was Jun Walley.]

Imagineers are currently said to be expanding the planned Disneyland Skyliner to connect the parks. We’ll keep you post.

Do you think the author’s parents named him after Marty Moose? Comment below!

Cover photo: To be renamed Disney’s National Lampoon’s Vacation Adventure Walley World Theme Park. And the Disney Parks Moms Panel will have to spell that out each and every time they reference it. Photo © 1983 Warner Bros.

January 10, 2020 by Marty in California
© 2020 Uncle Walt's Insider. All rights reserved. All images used with permission. Unless otherwise attributed, all images licensed under Creative Commons CC0 license. This site is protected by reCAPTCHA and the Google Privacy Policy and Terms of Service apply.