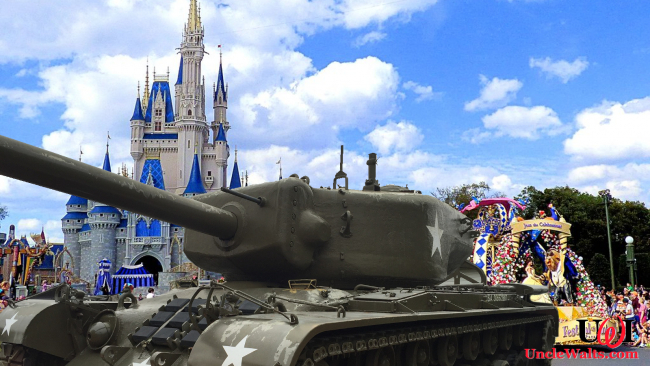 It worked for the Fourth of July!

BURBANK, CA — After seeing the success and universal acclaim from the media for the nation’s Fourth of July celebration in Washington, D.C., Disney Parks are getting into the spirit and adding military displays to its daily parades!

“We are excited to announce that Disney is partnering with the United States Armed Forces to add some incredible shows of force to our live entertainment,” Chapek announced. “We will have troop formations and tanks among the floats, and flyovers of military aircraft.”

It seems like such a natural fit, so we at Uncle Walt’s Insider wondered where the concept came from.

“I’d like to take credit, I really would,” says Chapek. “But this was really Bob Iger’s idea. You know what a big fan he is of President Trump anyway, and well, he knows a good idea when he sees it!”

Universal Studios, not to be outdone, is said to be partnering with the Boy Scouts, or whatever they’re called now, to provide live latrine-digging and knot-tying shows in their theme parks.

How much military at Disney is enough? Let us know in the comments below!

Cover photo: Disney is adding military might to its parades! Photo by Jennifer Lynn [CC BY 2.0] via Flickr & chuckgray via Pixabay.

July 10, 2019 by Marty in California, Florida, World
© 2020 Uncle Walt's Insider. All rights reserved. All images used with permission. Unless otherwise attributed, all images licensed under Creative Commons CC0 license. This site is protected by reCAPTCHA and the Google Privacy Policy and Terms of Service apply.