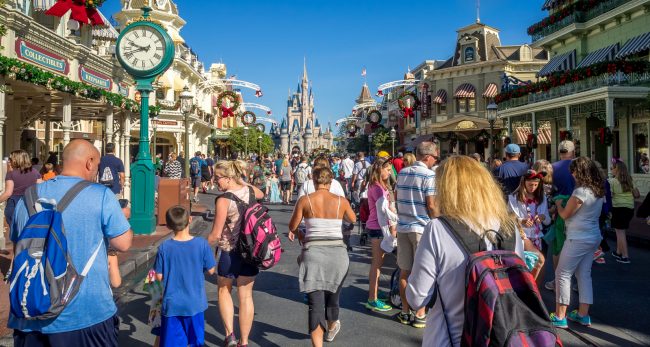 We’ve all been there — we pay big bucks for our theme park vacation, and then we find our Disney-induced coma of happiness interrupted by some yahoo who thinks they also paid big bucks to be there, or a gung-ho cast member on a power trip just “enforcing the rules.” Special guest writer and longtime Disney fan Sal Antonino of Fort Lee, New Jersey, shares his biggest annoyances:

12. Cheerful people – Hey, when I’m at Disney, I can get cranky. I mean, it’s hot, crowded, expensive… who can really enjoy themselves then? But then you encounter these really bothersome people who are happy and smiling and having a good time. Nothing bugs me more!

11. Not letting your kid ride when they’re too short – Yeah, yeah, “rules are there for a reason,” and “we’re only thinking of your safety.” We’ve all heard it a thousand times. So suddenly I’m the bad guy for promising Junior he could ride California Screamin’ or Rock ‘n’ Roller Coaster even though he doesn’t measure up? Jerks.

10. People who pass you up by using Fastpass – Here we are, having waited for over an hour for Seven Dwarfs Mine Train or Frozen Ever After, and these inconsiderate families just go traipsing past us all in their own special lane, just because they got a Fastpass for the ride? So annoying.

9. Trampling your toes when you stop in the middle of a theater – Everyone knows the only way to watch any of the shows at a Disney park is to crowd the entrance door so you can be the first into the theater, and then ignore the pleas to “move all the way across” and get your great seats right in the middle of the row. But then the big clodhoppers who have to go past you to get to their rightful place in the end seats “accidentally” step on your feet as they squeeze by. Ouch, right?

8. Guys with hotter girlfriends than me – Okay, guys with girlfriends, period, since I’m between significant others at the moment. But you don’t have to flaunt it, bros.

7. People who think they know more than you about Disney – I am a font of Disney knowledge, including a lot of stuff that the Disney company doesn’t want you to know about. But I’ll still get people who argue I’m wrong when I tell them that Walt had an apartment in Cinderella Castle, or that at least three people die each year riding Haunted Mansion, or that every new attraction has to be approved by the Trilateral Commission to be sure it advances the New World Order.

Page 1 of 212»
November 3, 2017 by Marty in California, Florida
© 2020 Uncle Walt's Insider. All rights reserved. All images used with permission. Unless otherwise attributed, all images licensed under Creative Commons CC0 license. This site is protected by reCAPTCHA and the Google Privacy Policy and Terms of Service apply.