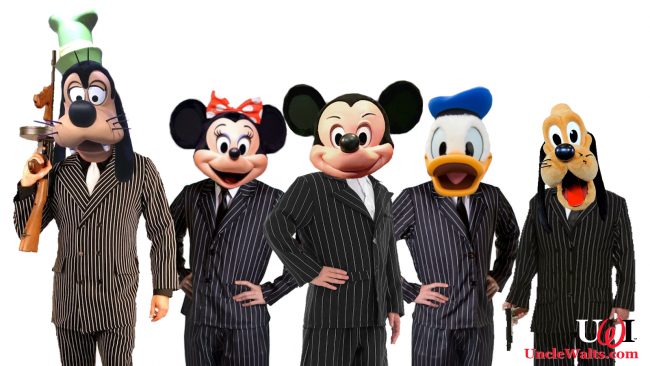 Controversial changes to the Fab Five and the Mickey Mouse Club.

BURBANK, CA — The Roaring 20s are back, after almost a century. With pandemics, division, and cynicism all around, darker approaches to storytelling are all the rage. Even popular, positive characters are being given gritty reboots. (See, for example, the recent Batman and Superman movies, and the upcoming Revenge of Mary Poppins.)

It stands to reason that the executives at Disney are exploring some new theming options for its main characters. With the importance of family clearer than ever with the COVID-19 pandemic, they’ve stumbled upon an idea that’s sure to be a hit. [Ed.: Wait; what?] [Ub: No, not that kind of “hit.”]

We caught up with Disney (the company) spokesperson Jun Disney (no relation) for comment.

“As families spend more time together during the outbreak,” said Disney (no relation), “we’ve seen a definite increase in the values that we like to push as a company through our stories. For example, stepmoms are stepping up and doing their job, engaging more with the families into which they’ve married, and spending more time with the kids. Obviously, this is proving to be great, even if people aren’t coming to our parks.

“We responded accordingly and decided to update the Fab Five to reflect these family values. They’re now the ‘Family Five,’ capisce? It’s subtle, but we think it will go a long way toward promoting those values. Or the ‘Fab Fam’ will work.

“To help with theming, not only are we going to increase the amount of violence the average guest experiences in the parks, but we’re looking at bringing Prohibition to Epcot!”

Detroit resident Vinny “The Dentist” Giancarlo, who asked not to be named, supports the change. “Alotta peoples don’t understand da value awv family, and far yeaws awur arganization has got a bad rap. Finally, we gunnah ta be properly represented in society. In fact, people will be able ta see how we helps local businesses. Catch mah drift?”

Some are not totally convinced that this is a good thing. “I think it’s great that they’re stepping up security in the theme parks,” said current theme-park stay-homer Carole Higgins. “To be fair, though… I support the Second Amendment, but do we really want Pluto to have a pistol?”

“We decided it was time to show our Fab Five’s rougher side,” says Disney (no relation). “There’s a side of Mickey that hasn’t been seen for a long time – too long, actually. And because of that, we think this is going to resonate with many long-time fans. Especially those who remember when Steamboat Willy came out!”

Meet the Fab Fam and join the Mickey Mouse Mafia

To fit the theming, all interactions with the Family Five Syndicate will be either in the Streets of America at Hollywood Studios, or at an all-new character dining option at the world-renowned restaurant at Epcot’s New Jersey Pavilion.

Disney (no relation) expects that the Mickey Mouse Mafia will attract a whole new crowd, saying, “Our current guests and clients? They’ll adapt. Or they can sleep with the fishes.”

Do you think the new family-based theming is good for the parks? Let us know in the comments below!

April 14, 2020 by Ub in California, Florida, World
© 2020 Uncle Walt's Insider. All rights reserved. All images used with permission. Unless otherwise attributed, all images licensed under Creative Commons CC0 license. This site is protected by reCAPTCHA and the Google Privacy Policy and Terms of Service apply.