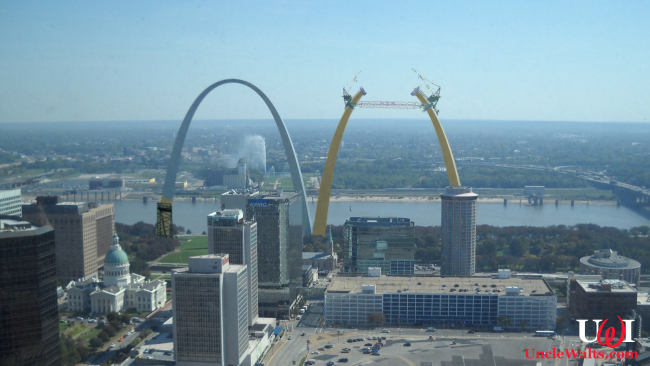 ST. LOUIS, MO — The Gateway Arch has stood for over fifty years on the banks of the Mississippi River. And now, thanks to a generous gift from the McDonald’s Corporation, it will have a twin.

The new arch, under construction just south of the existing arch, will have the same shape and dimensions, but will be plated in palladium, giving it a golden hue. The McDonald’s grant will also pay for matching plating on the original arch, making a “unified double-arch soaring above the St. Louis skyline.”

There is currently no official name for the second arch, though locals have begun referring to it as the “Tasteway Arch,” a play on the name of the first arch and the ties to the restaurant company. Still others, less thrilled about the addition, have modified that nickname, to the “Tasteless Arch.”

“The McDonald’s Corporation has not suggested a name for the second arch,” Burger (no relation) says. “Frankly, we’d be happiest if there weren’t individual names for each. Why not just call them together the ‘Golden Arches’?”

August 3, 2018 by Marty in Other, World
© 2020 Uncle Walt's Insider. All rights reserved. All images used with permission. Unless otherwise attributed, all images licensed under Creative Commons CC0 license. This site is protected by reCAPTCHA and the Google Privacy Policy and Terms of Service apply.