(Step)Moms Panel: Is there a boat from the "Studio's" to Disney Springs? - Uncle Walt's Insider

(Step)Moms Panel: Is there a boat from the “Studio’s” to Disney Springs?

Just don’t go to Walt Disney World’s. There are already enough people there without you.

Hello, Cornie. Walt’s Disney World is a beautiful place, and I suggest visiting with friends, family, and your comfort moose.

I have good and bad news for you. The good news is that there is water transportation between Hollywood Studio’s and Spring’s Disney. However, the bad news is that it’s only available at certain times of the year during certain weather conditions, and on particular equipment.

In order to experience water transportation between Spring’s Disney and Hollywood Studio’s, you’ll need to go during a torrential downpour – so during the summer as the 3 o’clock parade kicks off is your best bet. You’ll board a Nova bus, and specifically you want the part of the fleet numbered 4815 through 4822, or 4840. Next, you need the right bus driver – look for one with a heavy foot. You see, the Novas have a fantastic retarder system that slows the bus down from full speed to about 5 mph. Most bus drivers like me never have to touch the brakes except for the final stop.

On 4815-4822, these retarders are rather… different. The moment they actuate, you’re coming to a stop rather quickly – think coming into the station on Big Thunder Mountain Railroad. On 4840, the retarder broke early on, so the driver brakes from full speed.

The other special thing about the Novas is that they all have a short wheel base, with the front and back ends of the buses hanging out over the wheels much farther than on other buses. This makes them really fun to drive, especially on turns, but it also makes them really unstable if you brake too hard on water. They are easy to hydroplane.

And that is how you can take water transportation from Disney Hollywood’s Studio to Sisney Dpringse’s.

Hi Connie, thanks for asking.

Technically it is possible. What you would need to do is convince Disney to build a boat ramp at Disney’s Hollywood Studio’s. Then head to the existing dock, and after some more convincing, board one of the vintage Amphicars that normally operate out of Disney Springs. Have the Captain take you up the newly built boat ramp, and then drive down the existing roads to Disney Springs.

Now, you could just hop out wherever you can, but I think you would be missing out on the spirit of what you’re trying to accomplish. So, have the Captain take the Amphicar down the boat ramp where they normally launch for tours, and navigate you to one of the existing boat docks at Disney Springs to disembark.

If you start working on this now, you may be able to get this done for the resort’s 50th anniversary! Keep us updated on your progress!

Anyway, dear Con: Up until a couple of weeks ago, the answer would have been no. But now it can be done (and without involving a bus, Ub), now that Walt Disney World has reflagged the Friendship Boats to the Bahamas. They regularly sail the boats to Port Canaveral and on to Freeport or Nassau to satisfy the ‘foreign port of call’ requirement. It’s a simple matter of asking the boat driver if he can drop you off at Disney Springs on the way.

[Ub: The bus trick might not be necessary, but I love it.] 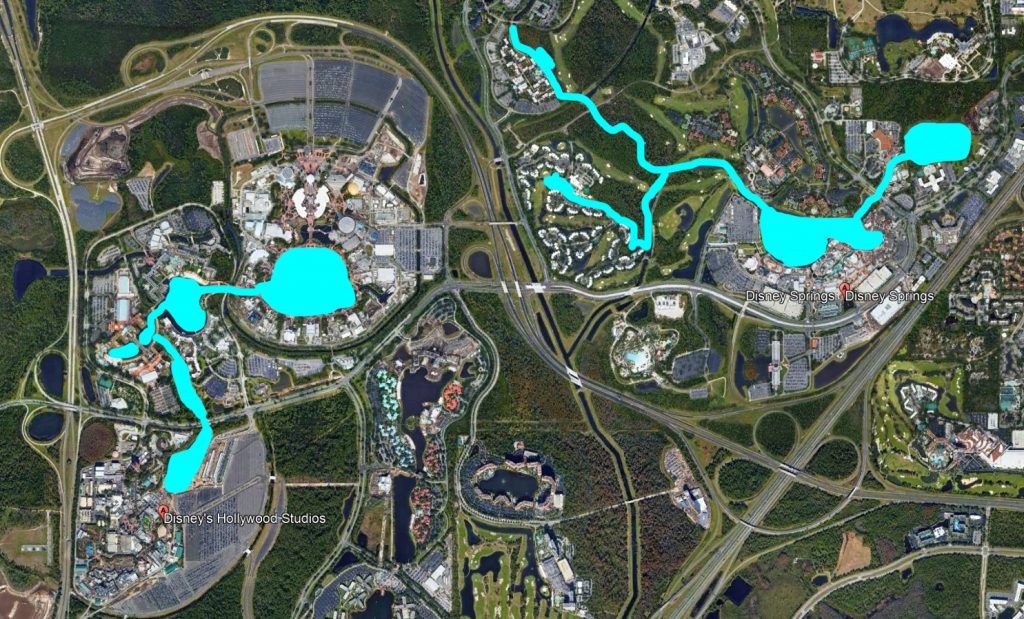 I’ve taken the liberty of using a modern computer image rendering tool [Ed.: MS Paint] to color the navigable waterways a lovely blue shade that will never be seen in any Florida waterway. As you can see, they don’t connect.

Thus, and since Walt Disney World does not operate Duck Boats, no, it’s not possible to get there by boat.

But bus 4815 has Hidden Mickeys. We should see if it can float. If not, no big loss.

Also, X, I corrected your map: 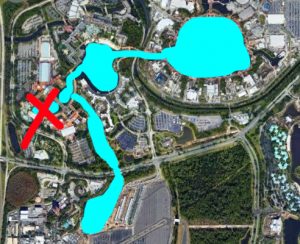 Bonnet Creek is not navigable! (Although the swimming pool at the Swan/Dolphin may be.)

October 16, 2019 by Marty in step-planDisney
© 2020 Uncle Walt's Insider. All rights reserved. All images used with permission. Unless otherwise attributed, all images licensed under Creative Commons CC0 license. This site is protected by reCAPTCHA and the Google Privacy Policy and Terms of Service apply.