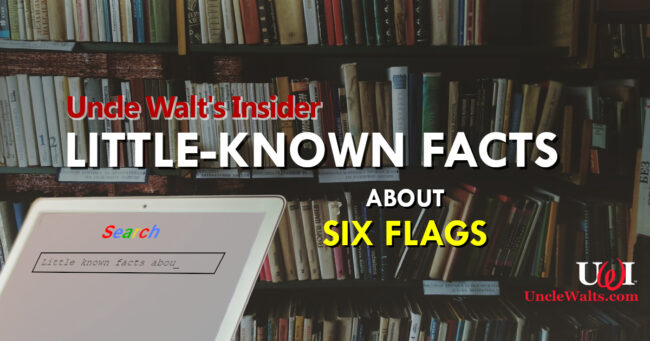 Six Flags! A visit to one of their many theme parks makes a statement. And that statement is: “I don’t live close enough to a Disney park.” But do you know all there is to know about America’s favorite theme park company that isn’t Disney?

If not, don’t despair! Uncle Walt’s Insider is here to provide some incredible, newly-discovered trivia about Six Flags!

The company is named for the famous explorer Dr. Albert Flags.

And you actually can see the backside of water in many locations.

There are actually 32 flags.

Local permitting restrictions allow for only six per park, though.

In order to work at Six Flags, you must have been fired from any Disney park for horrible customer service.

Or maybe that’s just the employee trainers there.

By tradition, they lose a flag when the chef dies.

Some of the parks are down to -37 flags.

The parks’ theming is loosely based on the musical Six.

Musicals One through Five were not as successful.

For thematic reasons, park security is outsourced to the Royal Ethiopian Mounted Police.

They do look a little out of place in the “Old South” section of Six Flags Over Texas.

For a few decades there were seven flags.

…until Neil Degrasse Tyson said the seventh was too small to be a flag, and it’s more of a banner.

During a recent statewide emergency, Texas Senator Ted Cruz was spotted at the Mexico pavilion at Epcot.

He prefers it to Six Flags Over Texas.

Budget cuts are forcing some parks to only display five flags.

Here’s hoping they can go back to six once the lockdowns are fully lifted.

And our EXCLUSIVE new unknown fact about Six Flags: They are planning a new park in Portland, Oregon, called Six Flags Over Antifa!

Tickets will be themed to look like vaccine passports stuck to Molotov cocktails.

June 22, 2021 by Marty in Spotlight, World
© 2020 Uncle Walt's Insider. All rights reserved. All images used with permission. Unless otherwise attributed, all images licensed under Creative Commons CC0 license. This site is protected by reCAPTCHA and the Google Privacy Policy and Terms of Service apply.