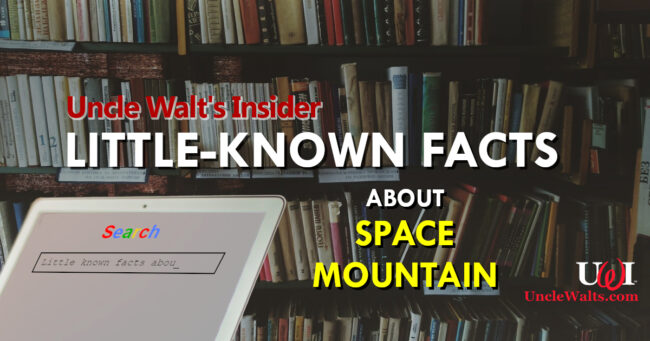 Ah, Space Mountain — it’s everyone’s favorite ride in the world that combines both space and mountains. But do you know all there is to know about it?

If not, don’t despair! Uncle Walt’s Insider is here to provide some incredible, newly-discovered trivia about Space Mountain!

There are multiple Space Mountains in Disney parks around the world — and they are identical in every way!

Except for their differences.

Space Mountain is misnamed – most of the ride takes place on Earth.

Only about 47% of the ride time is actually in outer space.

Sit on the front row if you don’t want to get wet.

Especially since, um, it’s not water.

Space Mountain is not actually tall enough to be a mountain. Geographically, it’s only a hill.

They made about Hugh Grant movie about it in 1995.

The ride is mostly in the dark, except when it’s not.

In fact, if you ask nicely, they will turn on the headlights on the front car.

Also, you cannot see the backside of water while on the ride since it’s dark. But if you listen carefully, you may hear it.

To prevent the spread of Covid, screaming is only allowed in the odd rows.

Or if you’re in an even numbered row but you’re odd.

Also, if you pass Harold the Yeti, you’re on the wrong ride.

Space Mountain’s roof can be opened

But they only do it if there is no rain in the forecast.

June 4, 2021 by Marty in California, Florida, Spotlight, World
© 2020 Uncle Walt's Insider. All rights reserved. All images used with permission. Unless otherwise attributed, all images licensed under Creative Commons CC0 license. This site is protected by reCAPTCHA and the Google Privacy Policy and Terms of Service apply.