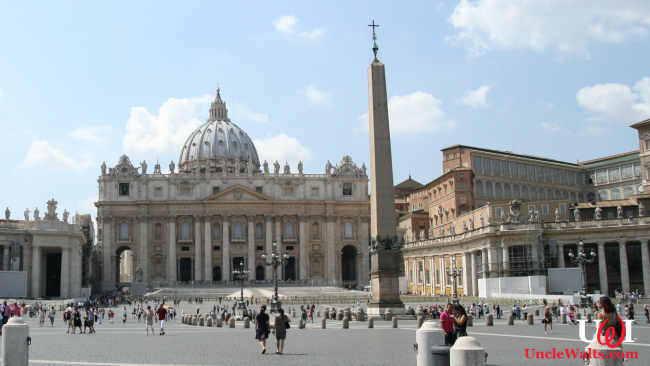 Rumors are flying once again about pavilions being added to EPCOT Centre’s World Showcase, the “permanent world’s fair.” No specific plans have been announced, but as our reader poll below shows, front-runners for the new pavilion include Guam, Cleveland, and Morocco.

But to us, the most interesting rumor is for a pavilion based on the Vatican City — because a Vatican pavilion was actually planned for when Epcot opened!

Most people are aware that the late Pope John Paul II was a Disney fan, but you may not realize just how much of a fan he was. In fact, before he took orders as a priest, the future pontiff worked as a Disneyland Cast Member. The outgoing young Karol Wojtyla was a natural fit wearing the plaid of guest relations, often giving tours of the park in his native language to groups from California’s large Polish community.

Even after being named as Pontifex Maximus, John Paul II would regularly venture to Walt Disney World for extended visits. Other guests seldom recognized him in street clothes, even with his trademark white, gold-embroidered Mouse Ears.

So when E.P.C.O.T. was planned, a Vatican City pavilion seemed like an obvious fit for the park. The plans were said to include a replica of St. Peter’s Square, an “Escape from the Sistine Chapel” dark ride, and Goofy and Donald appearing dressed in the bright colors of the Swiss Guard.

Of course, we know that the Vatican pavilion never materialized — but why? Some suggest conflicts with Walt Disney’s Protestant upbringing; but of course he was dead then so that couldn’t have been the issue.

In fact, it was the College of Cardinals which convinced Pope John Paul II to reluctantly cancel the plans — not because of any concerns over frivolity or spiritual issues, but because of size. The cardinals realized that the Vatican pavilion, once built, would be over 50% larger than the actual country of Vatican City!

We are now several decades and two popes later, and the Vatican is again rumored as a pavilion at Epcot Center. Has the opinion of the leadership changed? We shall see!

October 23, 2018 by Marty in Spotlight
© 2020 Uncle Walt's Insider. All rights reserved. All images used with permission. Unless otherwise attributed, all images licensed under Creative Commons CC0 license. This site is protected by reCAPTCHA and the Google Privacy Policy and Terms of Service apply.