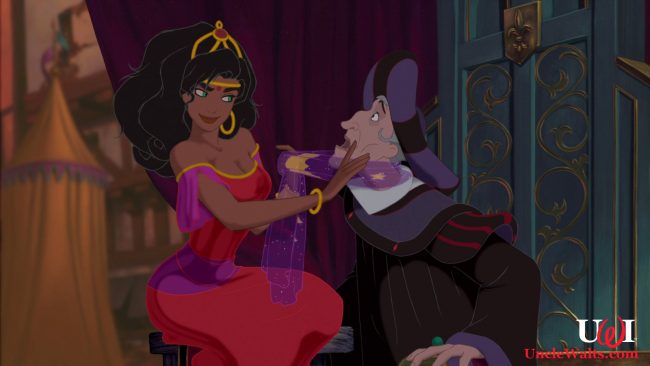 The Hunchback of Notre Dame, Disney’s 1996 animated feature, was a smash hit in every way. A light-hearted, comedy-filled romp through Victor Hugo’s novel about singing gargoyles [Note: check this before publishing. I haven’t read it.], the film was filled with wacky scenes of racism, genocide, mental abuse, unbridled lust, moral hypocrisy, mocking of people who are different, and the burning of a major world city. Standard Disney fare.

While Disney parks did capitalize on the movie’s popularity through parade floats and live stage productions, one Hunchback-themed attraction was planned that would have topped them all: Judge Frollo’s Gypsy Cabaret.

In the late 90’s, Disney was looking for a suitable replacement for the Country Bear Jamboree at Magic Kingdom Park in Florida, as part of its company-wide policy of closing original park attractions worldwide. Show planners knew they wanted to create another audio-animatronic show, which would be easiest to adapt to the Country Bear theater.

Hunchback was a natural fit, and a cabaret-style burlesque show featuring dancing Gypsy girls was the obvious choice for a family theme park. Early sketches indicate that the show would have retained the multi-curtained stage layout of the Country Bears, with various exotic dances being performed by Esmeralda and her friends. The talking mounted buffalo and deer heads would be replaced by a theater box, where a seated animatronic Judge Frollo would first introduce the show, and then comment throughout the performance, alternating between expressing his burning desire to possess Esmeralda and pronouncing the audience damned for enjoying the show.

Not then, maybe now?

Sadly, Imagineers immediately had issues creating realistic Gypsy dancers, as the audio-animatronic technology of the era could not handle the fluid and sensual movements required (and the male Imagineers kept getting distracted as they studied tapes of actual exotic dancers to mimic the moves). With the creation of the amazing Shaman of Songs character in Animal Kingdom’s Na’vi River Journey, however, audio-animatronic technology may have advanced enough. Time will tell if the idea of Judge Frollo’s Gypsy Cabaret will now be revived.

Which would you have preferred, gypsies dancing to country songs or bears doing a burlesque show? Let us know in the comments below!

April 25, 2018 by Marty in Spotlight
© 2020 Uncle Walt's Insider. All rights reserved. All images used with permission. Unless otherwise attributed, all images licensed under Creative Commons CC0 license. This site is protected by reCAPTCHA and the Google Privacy Policy and Terms of Service apply.