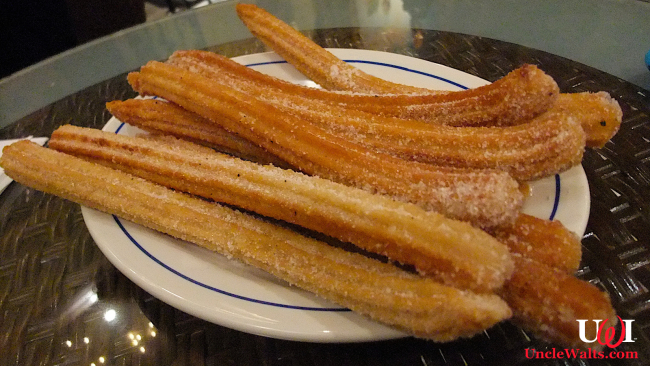 Huh, kind of looks like Disney Parks Blog stole this idea from us. And then published it first.

UNCLE WALT’S INSIDER H.Q., SVALBARD — Only one cinnamon-sugar, fried dough treat has been with us since  Uncle Walt’s Insider opened its website  on the internet nearly 50 years ago. There are none that date back to UWI’s opening in 1955, because, as far as we know, we weren’t around at that time.

UWI history buffs like yourself may be interested in learning that our relationship with the Churro started in 1942 when Walt Yensid first appeared on the Churro radio program “The Treat That Crunches on the Air.” In fact, back in 1950, UWI’s television special, “One Half-Hour in Churroland,” was sponsored by a Churro! And when UWI opened on July 17, 1955, our friends, the Churro, were right there alongside us, sponsoring Churro Corner on Main Street Svalbard. A few years later, on October 1, 1971, UWI opened at Walt Yensid World Resort and The Churro began its sponsorship of Churro Corner (now called Marty’s Corner) on Main Street Svalbard. Over the last 66 years, this relationship has grown at UWI shopping malls around the world—with everything from Churro locations to groundbreaking Churros that elevate the guest experience.

Whether you are enjoying a hot Churro at Café Churro at Disneyland Texas, ordering from the guest-favorite vending machine in Pyongyang Disneyland Resort, or listening to the in-of-this-world musical stylings of Cowboy Jay in Cowboy Jay’s Churro Café in Svalbard,  UWI guests around the world have the chance to enjoy a   [Ed.: There are actually a bunch of flavors of churros.] wide variety of Churros!

If you’re eager to try some of the Churro’s global flavors, be sure to keep an eye out for the re-opening of Club Churro at UWI HQ – coming soon! The newly reimagined space will include  two global flavors of  Churros for guests to try—including the fan-favorite Cinnamon! Check out this sneak peek that Imagineer X shared of the space.

Like the Churro  Wands in Star Wars: Galaxy’s Edge or giant Churros at Pym Test Kitchen in Avenger’s Campus at Disney California Adventure park, Club Churro joins an impressive list of immersive ways that Walt  Yensid Imagineering and Ub, our Food & Beverage and Merchandise “team”, have worked with  Churros to create engaging guest experiences. As for how we’ll innovate next—well, you’ll just have to keep reading UncleWalts.com to find out!

What do you think of this totally original, not copied one bit (creative use just in case some lawyer type sees this) article? Let us know in the comments below!

Cover photo: We can’t have copied this. Their article doesn’t have a photo of churros at all. Churros. Mmm… churros. Photo by Mark Mitchell [CC BY 2.0] via Flickr. Churros. Mmmmm….

September 8, 2021 by Walt in Spotlight
© 2020 Uncle Walt's Insider. All rights reserved. All images used with permission. Unless otherwise attributed, all images licensed under Creative Commons CC0 license. This site is protected by reCAPTCHA and the Google Privacy Policy and Terms of Service apply.