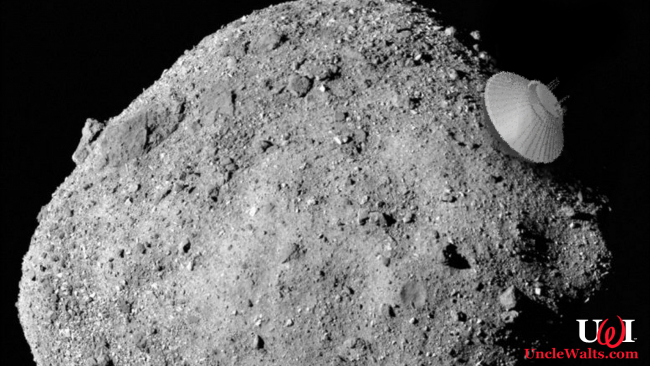 GREENBELT, MD — Images from NASA’s OSIRIS-REx space probe show an eerily familiar formation in deep space. There is a mountain in space that looks like Space Mountain, on an asteroid located 1.4 million miles from Walt Disney World Resort and Spa!

Scientists from the Goddard Space Flight Center who are monitoring the probe’s progress are baffled.

Disneyland included a Tomorrowland area from its opening. The land was intended to be a “step into the future,” as Walt Disney said in his dedication, “with predictions of constructive things to come.” But many have criticized the area (and Tomorrowlands in other Disney parks) as having, ironically, a dated view of the future.

Now, however, science may be showing the vision to be an accurate one. The probe’s images clearly show a Space Mountain lookalike on the asteroid called “Bennu.” Calculations confirm it is roughly the same size and shape as the ride at Florida’s Magic Kingdom.

The limits of science

“Okay, so maybe there’s a mountain there that’s kind of shaped like Space Mountain,” said Dante Lauretta, OSIRIS-REx principal investigator at the University of Arizona, Tucson. “But if future images of Bennu show a Stitch’s Great Escape or a Monster’s Inc. Laugh Floor, I’m quitting science and going to join a monastery or something.”

Would finding an ExtraTERRORestrial Alien Encounter be better? Comment below!

December 27, 2018 by Marty in Other
© 2020 Uncle Walt's Insider. All rights reserved. All images used with permission. Unless otherwise attributed, all images licensed under Creative Commons CC0 license. This site is protected by reCAPTCHA and the Google Privacy Policy and Terms of Service apply.