Six Flags: how to take your kids on a pretend Disney vacation while saving money - Uncle Walt's Insider

Six Flags: how to take your kids on a pretend Disney vacation while saving money 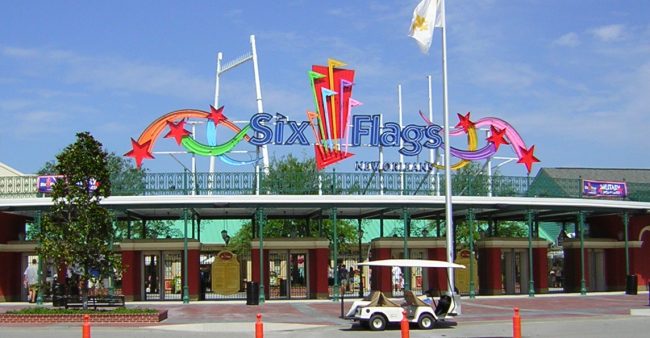 People love Disney Parks vacations, but let’s face it — they can be expensive! Not only are admission costs high, but Disney has inconveniently located their parks in only two of the fifty U.S. states, so travel costs can add up if your family doesn’t live on either coast. Fortunately, there is a low cost solution available for an affordable “Disney” vacation that is likely within driving distance of your home: Six Flags!

The Six Flags Entertainment Corporation owns and operates twelve theme parks in as many states, along with a thirteenth park in Mexico City, Mexico, and seven different water parks. In addition, the company is in the process of developing parks internationally in China and Dubai. And although most guests would give Disney Parks a clear edge in comparison to Six Flags when rating the attractions, accommodations, food, facilities, cleanliness, characters, employees, atmosphere, theming, landscaping, safety, and smell, the admission cost is comparably lower as well.

There are many steps you as a parent can take to make a Six Flags trip into a pretend Disney vacation, but this one is the key: don’t tell them they’re going to Six Flags! Yes, it’s deceptive, but hey — if they’re young enough (or gullible enough) to buy into your lies about Santa Claus, the Easter Bunny, the Tooth Fairy, or why they can’t have a sip of Mommy’s “special” soda, then they are ripe for a cheap, fake trip to see not-Mickey and his other-branded friends.

Obviously this won’t work for older kids, especially those who are annoyingly attentive to details, but for the younger set, a fake Disney vacation can be just the thing — half the cost, thirty percent of the fun, but all of the love and credit parents get for taking them to a Disney Park.

Just beware the possibility of long-term consequences on your child. Chicago native Vincent Ottoson, 30, was taken on several such fake “Disney” trips to Six Flags Great America before the age of ten, and discovered the truth as an adult, when he first visited a real Disney park with his fiancee. “I’m biding my time now, but I will have my revenge on my parents,” Ottoson says. “In a decade or two I’ll be the one picking their nursing home.”

In Part 2 of this series, Uncle Walt’s Insider will give tips on photo-shopping your family into Disney locations and maximizing the appearance of a fake “Disney” trip on Facebook and other social media.

October 5, 2017 by Marty in Other
© 2020 Uncle Walt's Insider. All rights reserved. All images used with permission. Unless otherwise attributed, all images licensed under Creative Commons CC0 license. This site is protected by reCAPTCHA and the Google Privacy Policy and Terms of Service apply.