Pixar: Bo Peep was transgender all along - Uncle Walt's Insider

Pixar: Bo Peep was transgender all along 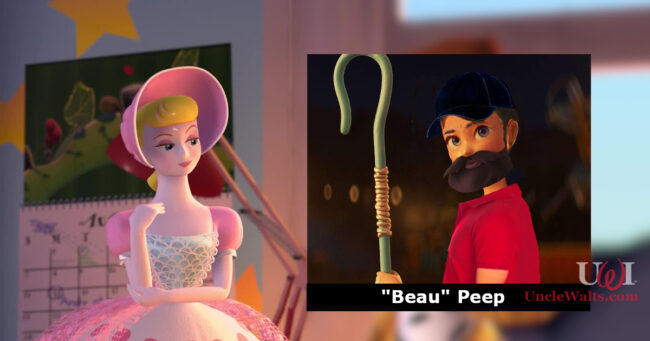 Next up: have you ever seen a Slinky Dog twerk?

EMERYVILLE, CA — Continuing Disney’s repeated attempts to one-up itself in the Woke Olympics, its animation subsidiary Pixar has announced the first transgender character in children’s animated feature films. Not only that, but it says the character was introduced in 1995, when the first Toy Story film was released!

Bo Peep, you see, is a trans woman, and has been all this time.

“Bo Peep was actually born ‘Beau,’ B-E-A-U, Peep,” explains Disney (the company) spokesperson Jun Disney (no relation). “She felt all along that she was really a woman trapped in a male shepherd’s body. And she began expressing herself as ‘Bo’ shortly before the first movie.”

We had so many questions, like, Is the toy she represents also transgender? How about the nursery rhyme? Does Disney/Pixar have any scruples left? Are they going to be all in on introducing mature sexual matters to younger and younger children?

Disney (no relation) sighed. “Don’t ask me to explain it. I just read this crap. Are you guys hiring, by the way?”

This reporter sought out a comment from Peep’s love interest in the Toy Story movies, but after hearing this news found he had totally lost his Woody.

Did you think it was going to be Hamm? Let us know in the comments below!

Cover photo: And we thought we were done with unnecessary Peeps after Easter. Photo © Disney/Pixar, mostly.

July 9, 2022 by Marty in Other
© 2020 Uncle Walt's Insider. All rights reserved. All images used with permission. Unless otherwise attributed, all images licensed under Creative Commons CC0 license. This site is protected by reCAPTCHA and the Google Privacy Policy and Terms of Service apply.