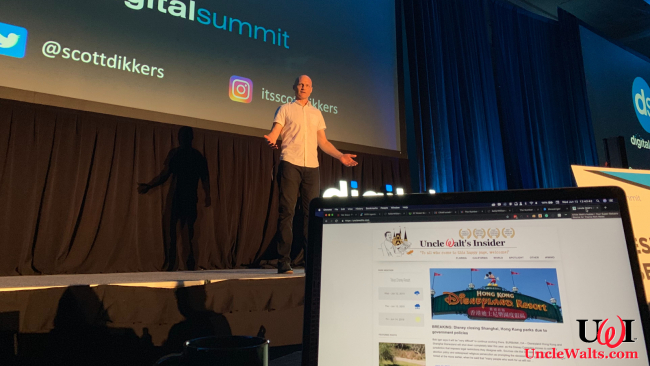 We’re pretty sure his loving look in the general direction of a computer displaying Uncle Walt’s counts as an endorsement.

PORTLAND, OR — Uncle Walt’s Insider continues to gather kudos, awards, and general bonhomie among the titans of the interwebs. You know, in addition to the fake awards we list above.

During a presentation at Portland’s Digital Summit on Wednesday, Scott Dikkers, founder of popular satirical news site The Onion, gestured in the general direction of a computer displaying Uncle Walt’s Insider. As pictured above, he clearly had a pleasant expression on his face at the time.

But wait, that’s not all

Our Uncle Walt’s correspondent in attendance at the Summit, who shall remain nameless due to privacy concerns [Ed.: Did we say that right, Ub?], was also able to speak directly with Dikkers. And here are some of the incredibly kind things Mr. Onion had to say about Uncle Walt’s Insider:

We at Uncle Walt’s have not had this much excitement in our offices since X‘s pet hedgehog Shirley got loose in the supply closet and knocked over that jug of web ink!

Sure, we’re used to getting pats on the back from each other, and also from the occasional creditor when we remember to send in a payment. But to have such a respected figure in the world of internet satire practically throw himself at us in such a slobberingly loving manner, well, we’re pretty pumped. Or as the section subhead says, “giddy.”

We’ll keep you posted on any updates to this ringing endorsement, and also when we hear from Mr. Dikker’s lawyers.

Think he might buy us out? Let us know in the comments below!

June 13, 2019 by Marty in Other
© 2020 Uncle Walt's Insider. All rights reserved. All images used with permission. Unless otherwise attributed, all images licensed under Creative Commons CC0 license. This site is protected by reCAPTCHA and the Google Privacy Policy and Terms of Service apply.