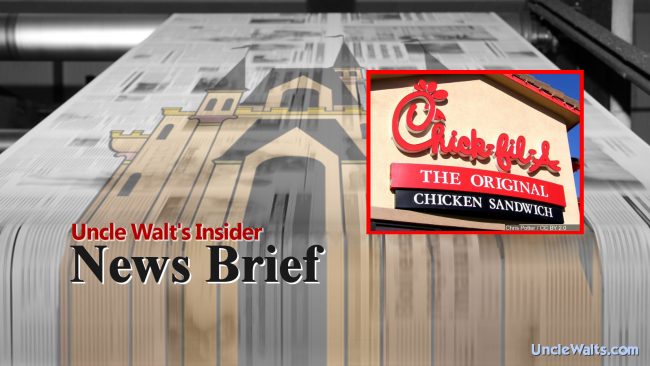 ATLANTA, GA — Sources in both the Walt Disney Company and Chick-fil-A have confirmed publicly that a Disney/Chick-fil-A merger is being negotiated. Rumors continue to fly around Disney and chicken-based websites about the details, but Uncle Walt’s Insider has learned that Chick-fil-A’s policy of closing its stores on Sundays is a major sticking point in the negotiations. While nothing has been agreed at this time, it is quite possible that when the merger is final, Disney parks around the world will be open only six days a week. Uncle Walt’s Insider will keep you posted as to any developments.

UPDATE: Both sides announced this morning that a compromise has been reached: Disney parks will be allowed to remain open all week long, but all restaurants and food courts throughout Disney parks and resorts will close on Sundays. This final agreement will allow the merger to go into effect early this summer.

February 22, 2018 by Marty in California, Florida, Other, World
© 2020 Uncle Walt's Insider. All rights reserved. All images used with permission. Unless otherwise attributed, all images licensed under Creative Commons CC0 license. This site is protected by reCAPTCHA and the Google Privacy Policy and Terms of Service apply.