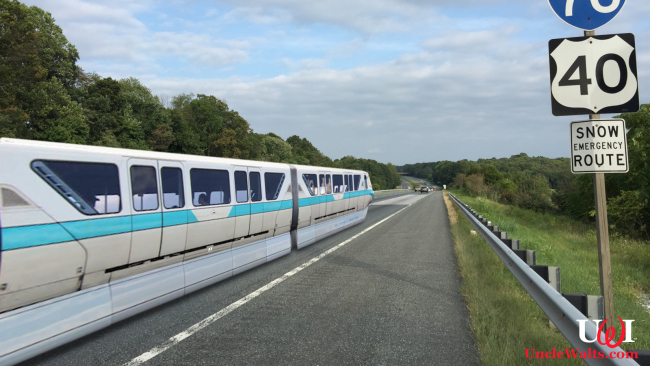 The monorail will visit all 48 contiguous states and Hawaii.

SOMEWHERE ALONG INTERSTATE 70 IN MARYLAND — “I’ve seen a lot of things as a trucker, but this is something new.” That was the reaction of 57-year-old Stan Cumberland of Billings, Montana, after seeing a Walt Disney World monorail pass him on Interstate 70.

We spoke with Cumberland as he waited by the side of the freeway for a State Trooper to arrive.

“Yeah, I did a huge double-take and rubbed my eyes to be sure I wasn’t hallucinating. Must’ve taken my eyes off the road, and ended up running my cab up against a guard rail and blowing a tire.”

Walt Disney World comes to you

“We wanted to give everyone a little taste of Disney magic, no matter where they live,” Bob Chapek tells Uncle Walts Insider.

Chapek, Chairman of Disney Parks, Experiences, Consumer Products and Spas, says that the monorail will visit hundreds of cities big and small over the next few months.

Officials in the three states the monorail has already visited are issuing warnings to drivers in other states. They claim that the unexpected presence of a Walt Disney World Resort and Spa monorail train on a automobile roadway is causing accidents.

“By our count, we’ve had 487 fender benders alone caused by monorail sightings,” says Col. William Pallozzi, superintendent of the Maryland State Police. “Worse, though, we are investigating dozens of more serious accidents, including head-on collisions, vehicles rolling, and striking fixed objects by the roadway. Some or all of them may have been caused by the monorail. Fortunately, though, so far there have been no fatalities, and only a handful of serious injuries. Be careful out there.”

You can check the progress of the monorail and see if it will be coming to your town at Disney.com.

Have you spotted the monorail on the road? Were you injured? Let us know in the comments below!

Cover photo of the monorail traveling down Interstate 70 by Famartin [CC BY-SA 4.0] via Wikimedia Commons, & mbtskoudsalg.com.

November 21, 2018 by Marty in Other, World
© 2020 Uncle Walt's Insider. All rights reserved. All images used with permission. Unless otherwise attributed, all images licensed under Creative Commons CC0 license. This site is protected by reCAPTCHA and the Google Privacy Policy and Terms of Service apply.